Nick Kyrgios and Thanasi Kokkinakis sparked raucous scenes at Kia Arena on Tuesday as they booked a ticket to the Australian Open men’s doubles semi-finals.

Kyrgios and Kokkinakis emerged from a decisive third set against Michael Venus and Tim Puetz with a 7-5, 3-6, 6-3 win, which bumped Rafael Nadal’s quarter-final against Denis Shapovalov from Nine’s main channel.

The decision by Nine, the owners of this masthead, sparked its fair share of online outrage, and even surprised Kyrgios.

“That’s unexpected. I wouldn’t expect that. Shapovalov and Nadal are two of the best players in the world right now, and (Shapovalov) is one of the most exciting younger guys as well,” Kyrgios said.

“But the level of entertainment is different, I think.”

There was just as much on-court anger at Kia Arena during the finish to the second set. 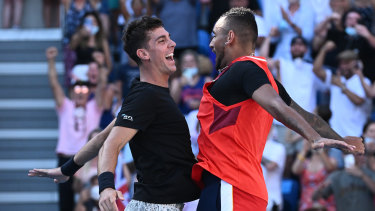 Kyrgios initially turned his fury on chair umpire Eva Asderaki, complaining that Venus and his wayward ball toss should have earned a code violation.

“You’ve got no idea what you’re doing,” Kyrgios said.

The crowd was then encouraged to heckle the New Zealand and German players between points, despite Asderaki’s pleas.

A tossed Kyrgios racquet and three clutch Venus serves later, the match was level at one-set all.

Kyrgios then turned his attention to Venus and Puetz, mocking the former’s ball toss and telling the pair they would never play in front of a similar atmosphere in their lower-profile careers.

The Kia Arena crowd lapped up Kyrgios’ encouragement, sparking Venus and Puetz complaints which saw some spectators removed by security.

The Australians broke serve early in the decider and never looked in significant danger of relinquishing the lead.

“This Australian Open, with everything people have gone through, they’re just so happy to see Aussies have success,” Kyrgios said when asked about the wild crowd. 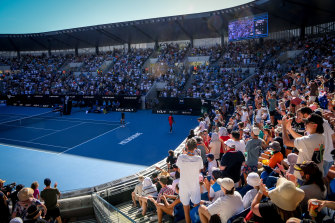 A parochial crowd lapped up the doubles action.Credit:Eddie Jim

“Demon [Alex de Minaur] in the fourth round, us carrying the flag in doubles a little bit – this Aus Open is about the people. Playing for them is more important than our doubles success.

“I just want to play and give the people of Australia and the Australian Open a show, and to try and grow the sport of tennis. That’s why I’m playing, and I know Thanasi is just enoying it. This is the most fun we’ve ever had on the court.”

The pair also implored Tennis Australia chief executive Craig Tiley to allow them to play their semi-final at Kia Arena.

“When we walk through this tunnel, there is nothing like it. We are seeing these stands packed. Everyone’s going [wild]. We don’t want anything else. This is perfect,” Kokkinakis said.

“I haven’t played in a doubles match, even a singles match, with an atmosphere like this. Hopefully Craig is watching and keeps us on this court. The rowdier, the better from everyone, honestly.

Kyrgios made his goal for the remainder of the week very clear.

“Unreal scenes. When we were young playing U12s we grew up at Melbourne Park,” Kyrgios said.

“To say we did it together, semi-finals. I’m not finished. I want to win this f—ing thing.”

The match was attended by largely young men, and Kyrgios took pride in seeing them have the time of their lives.

“There is no way around it, me and Thanasi are definitely role models to youth in Australia,” he said.

“We obviously attract that crowd and I know over the years, I haven’t been the best role model.

“I’ve been learning to deal with everything and now, at 26, I’ve matured and I’ve definitely realised that a lot of young kids and young people – even people low on confidence – look towards us.

“We’re not special people. We’re normal humans you might see walking in Australia and we’re now in the semi-finals of a grand slam. We’re just relatable. That’s the thing about it.”

The on-court action overshadowed a nasty incident early in the first set, when Kyrgios belted a ball into the stands and accidentally hit a young fan.

The boy was upset, so Kyrgios earned raucous applause when he ran a fresh racquet over to him as an apology.