Tennis stars are divided over the Novak Djokovic exemption fiasco, as Rafael Nadal branded the saga “a circus” and Garbine Muguruza denounced the Serb’s “nonsense battle” against coronavirus vaccination.

Martina Navratilova also told Djokovic he needed to “take one for the team” by getting jabbed, while Kevin Anderson accused him of having “rubbed many people up the wrong way”, as players past and present weighed in on one of the sorriest sagas in the sport’s history.

Djokovic’s great rival Nadal, who last week said the Serb had only himself to blame for being denied entry to Australia over his COVID-19 vaccination status, proclaimed “justice has spoken” after a court overturned the cancellation of his visa.

Nadal dubbed the affair – triggered by a medical exemption granted to Djokovic following a positive COVID test last month – “a circus” in an interview with Spanish radio station Onda Cero.

He added: “Whether or not I agree with Djokovic on some things, justice has spoken and has said that he has the right to participate in the Australian Open and I think it is the fairest decision to do so, if it has been resolved that way. I wish him the best of luck.”

Djokovic was still facing being deported by the Australian government, which would wreck his hopes of becoming the first man to win 21 majors and boost Nadal’s own attempt to do so. 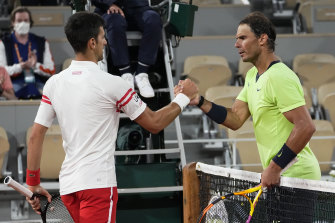 On Sunday, the Spaniard won his first title in Australia since his Australian Open triumph in 2009. His victory in the final of the Melbourne Summer Set came in his first competition in five months after a foot injury and a bout of COVID.

Acknowledging Djokovic’s record as a nine-time champion at the year’s first grand slam, Nadal joked: “On a personal level, I’d much rather he didn’t play.”

He added: “It’s sports, many interests move around it, on a general level, at an economic, advertising level. Everything is much better when the best can be playing.”

Fellow Spaniard Muguruza, the 2017 Wimbledon and 2016 French Open champion, said of players like Djokovic, who have refused to be jabbed: “It’s a nonsense battle – sooner or later everyone will have to get vaccinated. 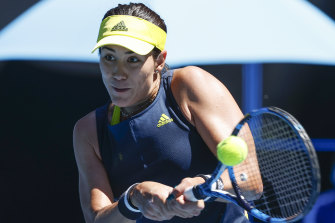 Garbine Muguruza is unimpressed by the Novak Djokovic saga.Credit:AP

“Yes, I am vaccinated. I know the requirements of the tournament, and I do not see why it is necessary to do it another way.”

Of the Djokovic deportation farce, she said: “What’s happening is a show, and I don’t know if this is good for tennis.”

Navratilova told Good Morning Britain: “It’s beyond belief, really. What a saga, and it all could have been avoided. Too many people messed up and took some things for granted.

“I just wish that Novak would have taken the vaccination to begin with. He’s a great leader, and amazing, amazing athlete, obviously.

“I admire him so much and have defended him so many times, but I cannot defend the choice to not be vaccinated. You still need to take one for the team. If you want to lead, and need to lead by example, and that example would be what’s good for the greater good.”

Anderson, who lost to Djokovic in the 2018 Wimbledon final after being beaten by Nadal in the final of the previous year’s US Open, was surprised by the outcome of the court hearing.

Criticising Djokovic for his triumphant announcement last week on Instagram that he had been granted a medical exemption to defend his Australian Open crown, Anderson told BBC Radio Five Live: “I think Novak did a very poor job in reading the temperature and his Instagram post, I think, really rubbed many people up the wrong way, and I can completely understand why.

“It’s been an unfortunate set of circumstances, and I’m actually a little surprised [by the ruling] given what I’ve seen in the news. Obviously, I don’t know all the intimate details, but I’d say my first reaction is a little surprising.

“I kind of thought that they would stick with their original decision.”

John Isner, who Anderson beat to reach the 2018 Wimbledon final, compared Djokovic to a professional wrestler who quit after becoming disillusioned.

“Only thing left to do is win the trophy again and leave town never to return, a la CM Punk,” Isner posted on Twitter.