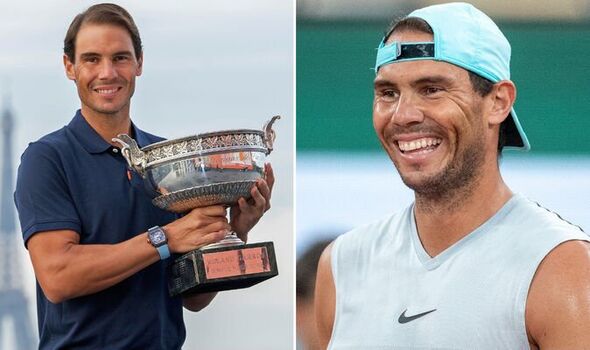 Rafael Nadal has claimed he would not have come to the French Open if he did not believe he could win a 14th title here. And the Spanish superstar insisted his Australian Open victory – when he won his record 21st Grand Slam title – proved he can triumph through the pain barrier without perfect preparation.

The world No 5 won in Melbourne despite fearing his career was over last year because of his nagging foot injury. Nadal, who turns 36 next month, has played only five matches on clay this season and revealed he was “living with an injury” after his fourth-round defeat to Denis Shapovalov at the Rome Masters.

It was Nadal’s earliest exit in the Italian capital since 2008 and is the first time since his debut in 2004 that the ‘King of Clay’ will enter Roland Garros without at least one clay title to his name. Speaking in his pre-tournament press conference, the Spaniard said: “There is nothing to recover from, by the way.

“What happened in Rome is something that happened very often in my practices, no? But yeah, I was, yeah, suffering after that for a couple of days, but I feel better, no? That’s why I’m here. The pain is always there. It’s not about to disappear now. It’s about if the pain is high and strong enough to allow me to play with real chances or not.

“It is something that I live every day so it is nothing new for me and is not a big surprise. So I am here just to play tennis and to try to make the best result possible here in Roland Garros, no? And if I don’t believe that this thing can happen, probably I will not be here.”

Nadal suffered a stress fracture to his rib losing the final at Indian Wells to Taylor Fritz on March 20 and had to miss the clay-court events in Monte Carlo and Barcelona. He has never arrived in Roland Garros playing so few matches on his favourite surface. “Unfortunately here I didn’t have the preparation that I would like, and unfortunately that rib fracture stop a little bit the great moment that I was having since the season started,” said the Mallorcan.

“But in the sport, things can change quickly, and the only thing that I can do is try to be ready if that change happens. You never know what can happen in the next couple of days. Same happened in Australia, and I put myself in a position to have a chance.

“And here is no different. In the case that that can happen, yes, difficult, yes too, but only thing I have to do is believe in my chances, believe in my daily work, and then stay positive and believe in my real chances.” Nadal has only ever lost three matches at Roland Garros but is on collision course to face world No 1 Novak Djokovic in the quarters here – and then possibly Spanish teenager Carlos Alcaraz in the last four.

Asked if he was the favourite this year, Nadal responded: “No, but, I mean, for sure not, because the results say that I am not, but it is something that never worried me much, no? Probably when I was a favourite, I never considered myself the favourite, no?

Nadal was at the Bernabeu when his beloved Real Madrid clinched La Liga title earlier this month and Los Blancos play the Champions League final against Liverpool in Paris on May 28. “Well, I am here to play Roland Garros more than anything else, no?” he smiled. “But of course I have my tickets already.”