The large workforce pulling together for the Australian tennis summer will undergo daily rapid antigen tests, as officials focus on every precaution to ensure COVID-19 has minimal disruption to the Australian Open and lead-up events.

A contingent of up to 3000 players and support staff are arriving in Melbourne or Sydney as the Australian summer of tennis kicked off with the start of the ATP Cup in the NSW capital on Saturday. 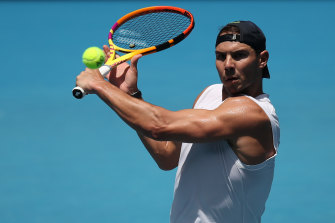 Tennis officials have been planning for COVID-19 positive cases, with several players already getting a positive diagnosis upon arrival.

There were smiles all round late on Friday, however, when one of the sport’s greats, Spaniard Rafael Nadal, touched down in Melbourne and quickly headed for the practice court on New Year’s Day in sweltering conditions.

The 35-year-old returned a positive test to COVID-19 after an exhibition event in the UAE last month, threatening his Australian campaign. But Nadal will fine-tune his preparations for 2022’s first major at an ATP 250 event in Melbourne next week.

Similarly, US Open champion Emma Raducanu – who withdrew before the same event in Abu Dhabi after getting COVID-19 – is one of the star attractions in Melbourne and had her first practice at Melbourne Park on Saturday.

The star teenager, however, is out of competition in Melbourne next week due to the short turnaround after contracting coronavirus.

Raducanu said: “The timing to compete in the first Melbourne event this week is too soon for me, having just returned from isolation.”

The 19-year-old was made an MBE, a member of the Order of the British Empire.

Most of the leading women players, including world No.1 Ashleigh Barty, however, are playing in Adelaide next week.

Tennis Australia boss Craig Tiley has said planning for the 2022 season had been much harder than one year ago, when the 2021 Australian Open was delayed until February and dozens of players were forced into two weeks of hard quarantine, severely disrupting their training schedules.

Russian world No.26 Daria Kasatkina said players are delighted to be back in Australia.

“Because last year was a big challenge for everyone to go through the quarantine, and then to compete.

“It was really tough mentally and physically.

“If it was to be quarantine [again] this year, I’m doubting that many players would [choose] to come. But now it’s a completely different picture.”

Tiley said the positive cases would be managed appropriately.

“The process of coming in is a 72-hour test before you get in, a negative test when you arrive, isolate until you get a negative result. You have to show proof of that negative test to get your accreditation, and then there’s a whole bunch of protocol to coach the players on what they need to be doing,” Tiley said.

“They’re well versed in doing this around the world.

“We are dealing with a variant that’s challenging because it’s highly infectious.

Poland’s world No.231 Urszula Radwanska was one of the latest players to test positive.

“Unfortunately 2022 doesn’t start good for me,” Radwanska said on Twitter on Saturday.

“Today in Melbourne I tested positive for COVID. Despite the strong symptoms, I hope that I will recover quickly.”

Tennis Australia has modified its health and safety planning for the various Australian events in recent weeks due to the sharp increase in COVID-19 cases, especially in NSW.

The workforce – accredited staff at the tournament venues in Melbourne, Sydney and Adelaide – will need to have a negative result from a rapid antigen test each day.