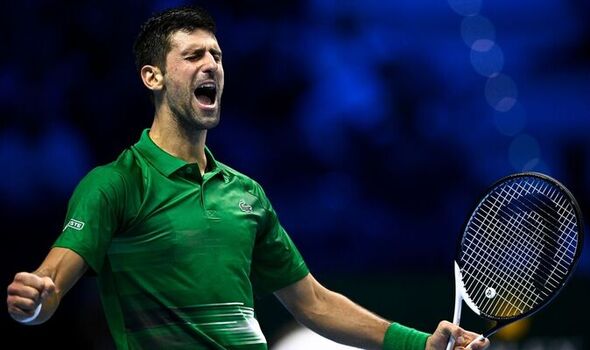 Novak Djokovic reached his eighth career final at the ATP Finals with a hard-fought 7-6(5) 7-6(6) win over tournament debutant Taylor Fritz in the semi-finals. The world No 8 came back from a break down in the second set to reach the championship match where he will face either Andrey Rublev or Casper Ruud in his bid to win a record-equalling sixth title at the year-end finals.

Djokovic and Fritz took to the court in the Pala Alpitour for the first semi-final of the day, with the Serb bidding to reach his eighth final at the ATP Finals while the debutant was looking to make it to the championship match in his first attempt. The five-time former champion at the tournament showed his sportsmanship early in the match as Fritz’s serve was called out in the very first game but Djokovic conceded the point as he agreed it was in.

The world No 8 was the first to pounce as he broke to love to lead 3-2 but he immediately got himself broken straight back, hitting back-to-back errors to gift the American the game. Both men continued to hold but didn’t look as strong as they had throughout the week, with Djokovic hitting just four winners en route to a first set tiebreak while the 25-year-old fired off 14 unforced errors.

It was the 35-year-old who earned the first mini-break courtesy of an error off the Fritz forehand but Djokovic gave the mini-break straight back as he dumped the ball in the net before they changed ends level at 3-3. It was the Serb who had the first set point on set at 6-5 and he managed to convert it with a booming forehand winner, taking the opener 7-6(5) in just under an hour before leaving the court for a quick break to get changed.

The tables quickly turned as Fritz set up two break points on the Serb’s serve in the very first game of the second set and was once again handed the break courtesy of the 13th unforced error off the Djokovic racket. The 21-time Grand Slam champion then looked on the verge of more trouble as he hit his first double fault of the match at 2-4 down but he held on to stay just one break behind the American.

With Fritz serving for the second set, the former world No 1 earned a break point at a crucial time and took it when the four-time title winner sent the ball long to keep himself alive and avoid going to a final set. The pair then contended another tiebreak, and just like in the first set they traded mini-breaks early on. Fritz won an epic rally to remain level at 5-5 but Djokovic responded with a winner to go a mini-break up and set up match point, blowing it with an error before earning his second match point, this time on the Fritz serve. He was able to convert it this time around and closed out a 7-6(5) 7-6(6) victory in an hour and 54 minutes to book his place in tomorrow’s final and stay undefeated this week.

It means Djokovic is now one match-win away from lifting a sixth title at the ATP Finals, which would equal long-time rival Roger Federer’s record. The world No 8 won the title in 2008 and went on a winning streak from 2012 to 2015 but has not lifted the trophy at the season-ending finals ever since.

The American has enjoyed a career-best season, winning three titles including his biggest-ever at the Indian Wells Masters, as well as making his first Grand Slam quarter-final at Wimbledon and cracking the top 10. He also made his ATP Finals debut thanks to the withdrawal of world No 1 Carlos Alcaraz and more than made the most of his last-minute admission into the tournament, going 2-1 in the group stage and reaching the semi-final on his debut.