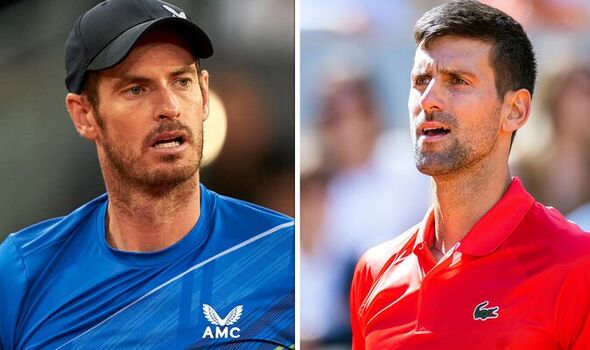 Novak Djokovic has opened up about how he came close to switching nations to play for Great Britain alongside Andy Murray when he was a teenager. Speaking after beating naturalised British citizen Aljaz Bedene at the French Open, the proud Serb admitted his happiness that he decided to stay loyal to his country of birth.

But he added: “If a player decides to do that, then of course he or she should have that opportunity.”

The world No.1, now 35, has won 20 Grand Slam singles titles and the Davis Cup for Serbia.

But back in 2006, Djokovic was targetted by the cash-rich LTA to boost British tennis when he was the youngest player in the world’s top 40.

Djokovic came to the attention of the LTA when he beat Greg Rusedksi in a Davis Cup tie in April 2006. Canadian-born Rusedski had decided to represent Great Britain – where his mother was born – and then LTA chief executive wanted to sign the young Djokovic to play with Murray for a Davis Cup team then ranked below Luxemburg.

Although the Serb would have needed six years to become a British citizen, he could have played for the Davis Cup team after a two-year residency period. He was offered full funding and top training facilities to persuade him to make the move.

Just before Wimbledon in 2006, Draper said “The ball is in their court, that’s the bottom line.”

Djokovic and his family decided to stay in Serbia – and the world No.1 has become his nation’s famous sportsman.

Bedene decided he wanted to represent Britain and was granted British citizenship in 2015 after living for eight years in the country. He is still based in Welwyn Garden City.

But he was blocked from playing for the GB Davis Cup team because of a new rule which prevented players from representing more than one country. Bedene played for Slovenia between 2010-12 and returned to play for the country of his birth in 2018.

Asked about the new, stricter ITF rules, Djokovic said: “I don’t really have a clear stance on that, because on one hand, I like to see a player stay and play for his country obviously, but at the same time I can’t judge somebody willing to move to another country, because there are different reasons and elements that affect that.

“It’s not only financial. It’s family, lifestyle, it’s God knows what. There are many, many different reasons. So if a player decides to do that, then of course he or she should have that opportunity.

“So it’s hard to say what is right, what is wrong. I was, myself, in this situation when I was 14. There were some talks with Great Britain, but I decided, along with my parents, to stay in Serbia, and I’m happy we collectively made that decision.

“But there are many players and athletes around the world that are looking for better opportunities and conditions, and I can’t judge that, absolutely. Everyone is individually trying to make the best life for them possible for their families, so I understand it.”