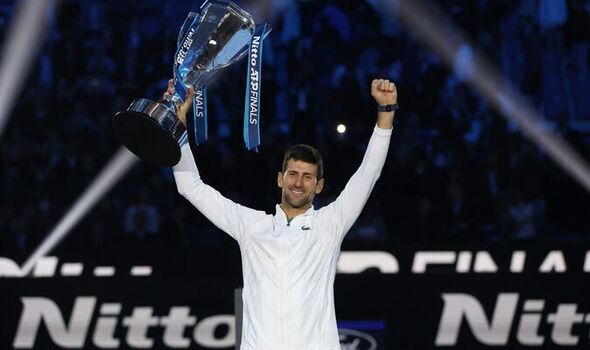 Novak Djokovic has addressed the future of his career as he admitted decisions about his tennis schedule and eventual retirement wouldn’t be determined by his own interests, as he admitted his two children will dictate the length of the rest of his time on the tour. It comes after the 35-year-old lifted a record-equalling sixth ATP Finals trophy in Turin, with his kids watching on from his box all week long and witnessing his victory.

Djokovic won his sixth ATP Finals crown on Sunday to equal long-time rival Roger Federer’s record, and it was also the first time that the Serb won the title in his thirties. As he continues to make history at the age of 35, the 91-time title winner was quizzed on his tennis future and the thought of retirement following his 7-5 6-3 victory over Casper Ruud to lift the title in Turin.

And the world No 8 admitted that it was two of his biggest cheerleaders this week – his children Stefan and Tara – who would likely dictate his future while he remained fit and healthy. “There is no end zone, as they call it in American football,” Djokovic started, first shutting down any thoughts of an impending retirement.

“I don’t feel I have thoughts or ideas about how I want to end my career in terms of when I want to end it, if that’s an answer for you. If I had something on my mind, I would share it with you, saying, Okay, this is what I’m navigating towards, and when I do that, I’ll leave the racquet. I don’t have that.”

JUST IN: Roger Federer weighs in on chances of coaching after retirement

The 21-time Grand Slam champion also said he had no problem with motivation, as he continued: “For me it’s about, first of all, having good emotions and positive feelings on the court, practice court. One thing is to win big trophies, and everything is super nice, it’s a fairy tale.

“But you got to go through hardship, a lot of hardship, a lot of difficult days and challenging tasks on a daily basis in order to push yourself, motivate yourself, work on yourself in order to get to this level and eventually with a chance to win.” Djokovic confessed that things could change if he lost his passion for the sport but thought it was more likely that Stefan and Tara’s needs would take precedence.

“That’s for me the most important thing. If that’s something that is fading away or I’m not feeling that passion or love for the game as much in terms of competition, because I feel like the love for the tennis will never fade away, it will always stay there. So I will always stay in tennis in whatever shape, form or role,” he explained.

“But competition is something different. Professional competitive career requires a lot of sacrifice with family and all the other things in life.” While things were working for Djokovic in the present moment, he had already admitted that his wife Jelena found the week “stressful” as she tried to keep their kids entertained in Turin, and the world No 8 knew that things could change.

He added: “For that, it’s necessary to have the support of the close ones, to have the right balance, to figure out optimally what works the best so that you can still continue playing tennis. Right now things are functioning well on that end for me. But you never know what’s going to happen.

“My kids are eight and five. They’re growing older. They’ll have different interests. Maybe they’ll have a different requirements or demands from me. I have to think about them. If I have to spend more time with them or support them in their lives, maybe less with tennis, that’s going to happen.”

But Djokovic reassured fans that his dedication to the sport and his desire to keep winning hadn’t faded as he concluded: “I don’t know what the future holds, but I know that what I hold in my mind is a huge hunger still to win trophies, make history of this sport, compete on the highest level all around the world, bring good emotions to sports fans, tennis fans. That’s what drives me a lot. I have a lot of different motivational factors, and I don’t lack any motivation for the moment. Of course, we all have bad days or bad weeks. But generally the feel is still there.”