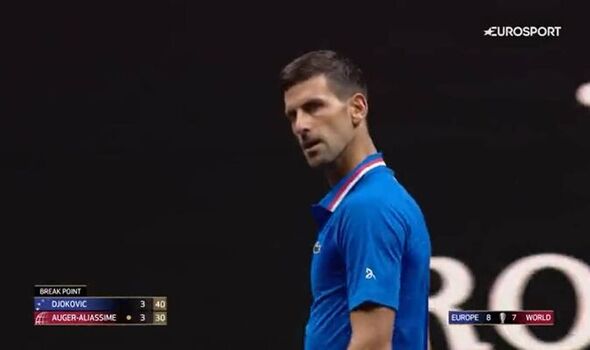 Novak Djokovic was clearly pumped up for his Laver Cup clash with Felix Auger-Aliassime and let out an angry outburst at a line judge earlier in the match. The Laver Cup was finely poised heading into the tie with Team Europe leading Team World 8-7.

Djokovic was the strong favourite heading into the second match of the day after his impressive return to the court on Saturday night. And he got off to a fast start, immediately breaking his opponent to take an early lead.

Auger-Aliassime soon settled down himself to break back with the set finely poised midway through at 3-3. Djokovic had a break point on Auger-Aliassime’s serve before a cross-court backhand was called out.

The call was immediately overruled by the chair umpire as Djokovic had put his hand in the air to challenge. The former world No 1 then screamed in anger “Come on!” before staring at the direction of the line judge. 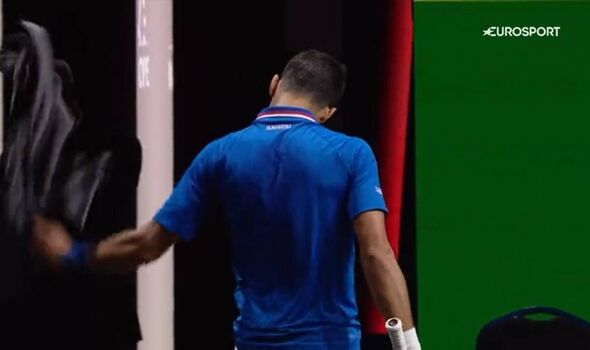 Auger-Aliassime then challenged the overrule from the chair umpire with huge gasps inside The O2 when hawkeye showed the ball had in fact landed out. “Wow, Djokovic furious the fact it was called out,” The Eurosport commentator said. “But he got it wrong.”

Replays then showed Djokovic returning to his corner and throwing his towel down in anger. That proved to be a pivotal point of the match as Auger-Aliassime went on to hold serve before breaking to love in Djokovic’s next game.

Auger-Aliassime then held his nerve to serve out for the set and give Team World a huge advantage. Djokovic then got off to the worst possible start in the second set as the Canadian got the early break.

The 35-year-old broke back midway through the set with a tiebreak needed to settle the score. But Djokovic never looked relaxed or in control with Auger-Aliassime picking up his first win over the Serbian.

That victory also gave Team World their first lead of the Laver Cup and put them one win away from lifting the trophy for the first time.