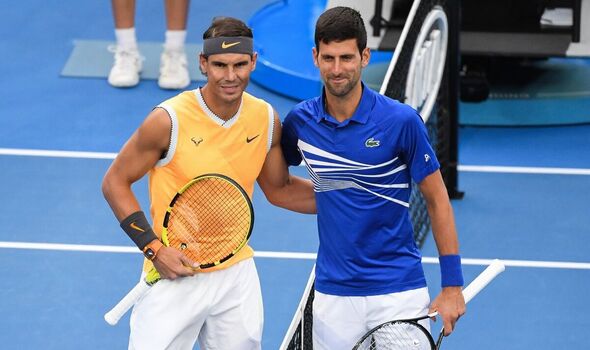 John McEnroe has told Novak Djokovic and Rafael Nadal that they won’t be able to “settle the GOAT debate” this season as both men bid to keep making history at the upcoming Australian Open. The retired pro claimed that both men will only be fighting each other for the big titles this year and doesn’t think one will outdo the other.

Djokovic and Nadal will continue their quests for Grand Slam glory at the upcoming Australian Open, where the Serb can equal the world No 2’s record of 22 Major titles if he wins in Melbourne Park, while the Spaniard could extend his current milestone total in men’s tennis to 23. The Grand Slam race has often been used as the most common stat to determine who is the greatest player out of the Big Three, but one former pro doesn’t think either player will pull ahead anytime soon.

McEnroe has claimed that the long-time rivals will be unable to wrap up the GOAT debate during the 2023 season as he picked the nine-time former champion in Melbourne to go on and win a record 10th Australian Open crown this month. “Another big question for 2023 is how much longer can Rafa and Novak really hold out?” the seven-time Grand Slam champion wrote for Eurosport, looking ahead to this season.

“In my opinion, the two are just fighting each other, so they have real incentive to win a few more tournaments before retiring. I trust both of them.” While tennis continues to wait for the next generation to step up and dethrone Djokovic and Nadal, the American warned that they could never be written off amid concerns over the Spaniard’s lack of match wins and injury woes at the back end of 2022.

He continued: “I honestly don’t know if Novak or Rafa will settle the GOAT debate once and for all this season. I continue to be impressed with all of the Big 3. I mean Roger just stopped playing and what Rafa did in Australia in 2022 and then at the French Open just speaks for itself.”

While McEnroe thought the Australian Open would be Djokovic’s, he backed Nadal to continue making history at the French Open and pick up a 15th title on the Parisian clay to keep the race interesting. “It’s almost impossible to bet against Novak in Melbourne and against Rafa in Paris,” he admitted.

“Novak has won the Australian Open nine times. After what happened to him in Melbourne last year it will be very interesting to see how the fans react to him and how he reacts to being back. I see him as a favourite and from my point of view Rafa is still the man to beat at Roland Garros.”

Nadal has been the man that some have called into question recently, with the 36-year-old himself shutting down any rumours of his retirement during the recent United Cup as concerns grew over his age and frequent injury issues. But McEnroe wasn’t worried, adding: “The man has won the French Open 14 times. As long as he plays, he will always be the favourite at this tournament. And I heard Rafa is still desperate to play that he’s hungry. So is Novak.”

While the retired pro thought that neither Djokovic or Nadal would be unable to cement themselves as the GOAT this year, he did note that he thought it was the Serb who wanted it more. “The younger players are on the rise, and as a fan you’re hoping they’ll take their game to an even higher level,” he explained.

“That doesn’t make it any easier for Rafa and Novak. But you should never write them off. Novak looks the hungriest to me. Of the big three, he’s the one who seems to want to be the record Grand Slam winner and thus the GOAT.”