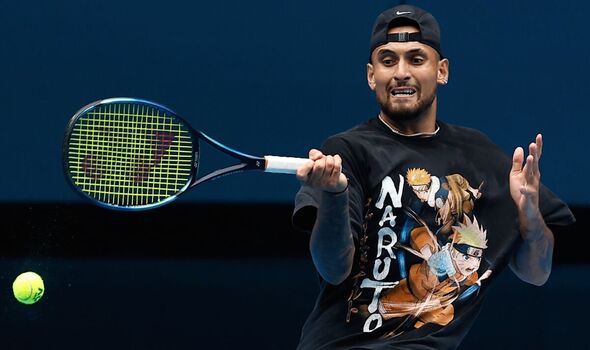 Nick Kyrgios has claimed he has gone from a Grand Slam dark horse to a favourite to win the Australian Open. And the Wimbledon finalist said his defence of the doubles title with his pal Thanasi Kokkinakis could be sacrificed if they progress in their home singles event.

The No.19 seed Nick Kyrgios will face Roman Safullin in the first round but will have to beat No.9 seed Holger Rune and then world No.6 Andrey Rublev to reach the quarter finals.

Speaking before today’s draw, the Aussie No.1 said: “I am one of the best players in the world, so I’m definitely going to go into the Australian Open or any tournament with confidence. I feel like I’ve proven that I can go deep in a Grand Slam and hopefully, it’s gonna be a good couple of weeks.

“This is the first time genuinely going into a Slam feeling like I’m one of the guys that can really take the trophy and knock on the door. So I don’t know what I’m going to be feeling when I get out there.

“Australia just loves to get behind a winner.

“Hopefully I can just take it step by step. I know that there are so many capable players who are able to damage in this tournament. Usually I’ve got nothing to lose and I am just putting on a show, but I’m going to try and really find that balance between the pressure and also enjoying the Open at home.”

Kyrgios and Kokkinakis were stars of last year’s Australian Open as they won the men’s doubles title. But asked if success in the singles could prevent them teaming up again this year, Kyrgios said: “Definitely. I think from both parties. If he’s going deep as well, which is more than capable of doing.

“We are singles players at heart. The doubles Grand Slam last year was just a flash in the pan how we were able to do that. So, look, we’re not we’re not we haven’t had one conversation about doubles yet.. We’re just going to go in and have some fun. If we play we play and if we don’t, we don’t.”

Kyrgios, who pulled out of the United Cup with a knee injury, reported he is fit to play a charity match against Novak Djokovic in the Rod Laver Arena on Friday night.

He also welcomed the new Netflix series Break Point where he stars in the first episode.

“I think it’s great,” he said. “It’s not so deep into the origins of my life as yet but you’ll obviously get into that but I think the first episode is pretty exciting and I think it will keep people interested for sure.”

The Aussie No.1 was speaking in a media conference after the announcement he will be investing in NBL basketball franchise South East Melbourne Phoenix.

“Everyone knows my basketball roots and to be part of the NBL, it is a massive pleasure for me,” said the Boston Celtics fan.

“I see myself being an entrepreneur in sports after my career. My tennis career is not gonna last forever.”

Asked how much he was investing, Phoenix CEO Tommy Greer said: “It’s confidential.”