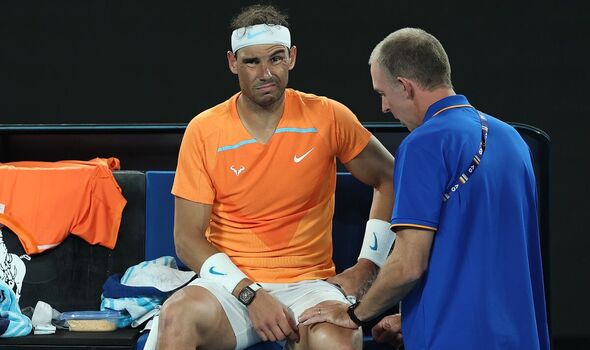 Rafael Nadal limped out of the Australian Open today as he took a medical timeout before losing to world No.65 Mackenzie McDonald.
With his wife Xisca crying in the stands in the Rod Laver Arena, the Spanish superstar completed the match in pain against the American in front of a stunned crowd.

The top seed, 36, appeared to be struggling with his left hip and leaned against the advertising hoardings in pain before leaving the court for treatment at 3-5 down in the second set.

He returned to lose 6-4 6-4 7-5 but was unable to chase down balls and his forehand lacked its usual ferocity.

Nadal won his second Australian Open title here last year after fearing his career was over because of a chronic foot injury. After claiming his male record 22nd Grand Slam title at the French Open, he pulled out of his Wimbledon semi-final with Nick Kyrgios with an abdominal strain.

JUST IN: Australian Open umpire dives off chair and chases fan after theft

The Spaniard’s defeat leaves Novak Djokovic an even hotter favourite to equal Nadal’s record of 22 Slams by winning his 10th title here. Nadal has dropped only four games in their previous meeting at the 2020 French Open but the American started strongly and got two early breaks to lead 4-1.

Nadal, who won in the first round after Jack Draper suffered from cramp, was unhappy at the start of the match as clashed with umpire Marijana Veljovic over the shot clock.

McDonald said: “He is an incredible champion. He is never going to give up regardless of the situation. Closing it out like that against that guy is always tough. I am happy I kept focussing on myself and I got through. Last time we played on Court Philippe-Chatrier (at the French Open) he kicked my butt. I was glad to play him on a hardcourt.”

Nadal insisted he needed time to cross the court in the Rod Laver Arena to get his towel and she was starting the clock too early.

“With you it is always the same,” said the top seed.

The discussion re-started at 3-3 in the second set. “Unfortunately I cannot wait all the time,” said Veljovic.

Nadal saved a break point at 4-5 in the third set with a huge ace but Mackenzie broke in the next game and took his first match point when the Spaniard put a weak backhand return into the net.

Nadal left the Rod Laver Arena – perhaps for the final time – to a standing ovation.