Home » Tennis » ‘I think I have more to give’: Millman to reassess future after Open

‘I think I have more to give’: Millman to reassess future after Open

John Millman will reassess his playing future after this year’s Australian Open, but a bright start to the summer – including three-straight top-100 wins in Adelaide – has convinced him he has “more to give”.

The man who famously upset Roger Federer to reach the 2018 US Open quarter-finals is coming off an injury-riddled season in which he won only nine of 26 matches and his ranking plummeted as low as No.160.

At age 33, Millman is realistic about how long he has left at the top of the sport after a career that saw him overcome serious shoulder issues to reach a best ranking of 33 and represent Australia in the Davis Cup and Olympics. 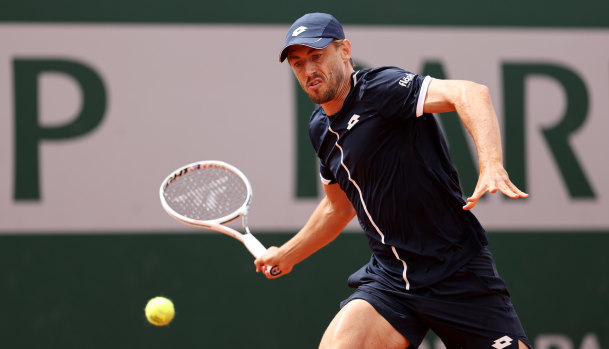 John Millman will reassess his playing future after this month’s Australian Open.Credit:Getty Images

“I think I’m at that stage where I don’t take it for granted,” he told The Age and Sydney Morning Herald.

“If you’d asked me towards the end of last year, when I was struggling to put two matches together because [of injuries], it probably would have been a different answer.

“I probably would have said, ‘To be frank, I’m really battling here’. But this [success in Adelaide] gives me a lot of confidence. I’m not quite ready to hang them up, I don’t think.

“But you’ll have to ask me that one in a little bit. I’m focusing on this summer. I don’t take it for granted, but I also feel like I have a bit more to give.”

Millman was grateful to receive the final Australian Open men’s wildcard ahead of Aleks Vukic and James Duckworth, believing his “service to tennis over a fairly long time” was the deciding factor.

The decision went against the grain of what Tennis Australia did with many of the wildcards for Melbourne Park, with selectors prioritising the future with the likes of Rinky Hijikata and, on the women’s side, Olivia Gadecki and Talia Gibson.

“I probably wouldn’t have accepted the wildcard if I wasn’t up for the fight,” Millman said.

“I can’t really guarantee too much and that’s probably a bit of a reflection of where, physically, I’ve been and maybe a little bit mentally, especially during that COVID period.

“But, geez, getting to play in Australia, in your home slam, in front of your home crowd – if that doesn’t give you energy, and if that doesn’t kind of put you in that mindset where you want to tackle it head on, then you probably shouldn’t have even come to play here.”

Millman suffered a freak mid-match eye injury in Acapulco in February, and dealt with hip and back issues – the latter has been a particular problem during the clay swing recently – that sapped his enjoyment at times.

But he credits high performance and rehabilitation coach Dirk Spits’ return from AFL club Brisbane Lions with revitalising his body and mind for the Australian summer.

Millman qualified in Adelaide with wins over Bernabe Zapata Miralles and countryman Chris O’Connell, then upset Albert Ramos-Vinolas in the first round to set up a clash with another Spaniard, Alejandro Davidovich Fokina on Wednesday.

“It was a really disappointing year for me, so to bounce back and be given an opportunity at an AO is something that’s really exciting for me – and I’m not taking it for granted.

“Even more exciting is I feel like I’m actually playing some pretty decent tennis going into it … Dirk Spits has got me in shape and I feel like when I’m in shape, and I’m moving well on court, I’m a different player.”

“I probably wouldn’t have accepted the wildcard if I wasn’t up for the fight.”

Millman insists the “desire” is still there to play at the highest level, but he wants to see how his body holds up throughout January and is not yet willing to publicly commit to another full season.

At the same time, he wants another story to be a greater focus than how much longer he has left on the court: former national academy coach Anthony Richardson’s death last week.

“Where I’m at with my body and my game pales in significance to what’s happened in the Queensland tennis community. I think everyone from Queensland is playing for ‘Richo’,” Millman said.

“He affected so many people in the Queensland tennis community, whether it was coaching at ‘Churchie’, my old high school, way back when, to the impact he’s had with some of the best up-and-coming talents in Queensland tennis.

“He was as genuine a guy as you could meet.

“I’ve had plenty of highlights throughout my career – playing for the country in Olympics and Davis Cup, and some big runs at grand slams, which is pretty cool. But I’m genuine when I say that one of the highlights of my career was knowing Anthony Richardson, and we’re hurting as a community.”

Watch the Australian Open live and free on the 9Network – Channel 9 and 9Gem.