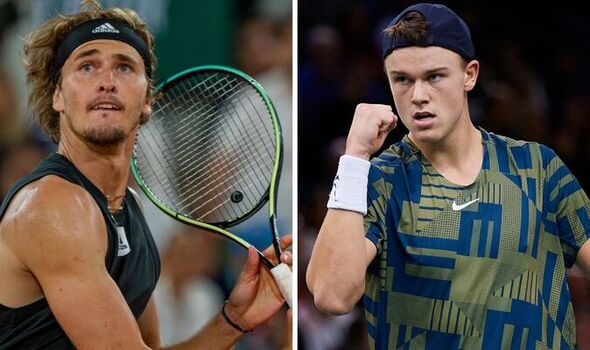 Alexander Zverev already has a threat ahead of his return to competition following a six-month injury layoff. The former world No 2 will play this week’s Diriyah Tennis Cup exhibition after suffering a horror injury at the French Open before being diagnosed with a bone marrow edema in September, and Holger Rune is excited to see Zverev back on a tennis court so he can fight him for the biggest titles after claiming he would be able to “stop” Novak Djokovic and Rafael Nadal from winning the biggest titles.

Zverev is gearing up to play his first match in six months at this week’s Diriyah Cup exhibition before making his return to the official tour in Australia next month. And one player excited about his comeback is world No 11 Rune, who ended the season by lifting the biggest title of his young career at the Paris Masters by beating five top 10 players en route – a record at tournaments outside of the top eight ATP Finals.

The 19-year-old had upset Zverev during what was the German’s opening match in Munich back in April, defeating him in straight sets before lifting his first career title while ranked down at No 70 in the world. And Rune has now told Express Sport that he is looking forward to the 19-time title winner’s return so he has the chance to compete with the best on tour.

“Yes I do believe that,” the three-time title winner exclusively told Express Sport when asked whether he believes players like himself and world No 1 Carlos Alcaraz can stop Djokovic and Nadal from winning the biggest titles in 2023. “I am happy they (Novak and Nadal) are there because there is no doubt that they set a very high standard.

“The level is incredibly high thanks to them.” And the Dane also threw Zverev into the mix, as he already had his sights set on continuing to upset the Olympic gold medalist following their meeting in Munich.

Rune added: “Also I look forward to Zverev coming back next year. He has been very close to win a Grand slam and his level when he plays at his best is very high. I hope for the competition that we will have everyone competing next year because this will mean super high level matches.”

Both men are playing this month’s new mixed-gender team exhibition event at the World Tennis League in Dubai and are on opposing teams, with Zverev joining the likes of Dominic Thiem and Elena Rybakina on Team Hawks while Rune will join forces with Felix Auger-Aliassime and WTA world No 1 Iga Swiatek among others on Team Kites.

But they won’t face off when the Hawks meet the Kites on December 22 as Rune has been called up for the singles against Thiem while Zverev will pair up with Wimbledon champion Rybakina in the doubles to face Auger-Aliassime and Genie Bouchard.