Djokovic shuts down question as he refuses to divulge physical issues 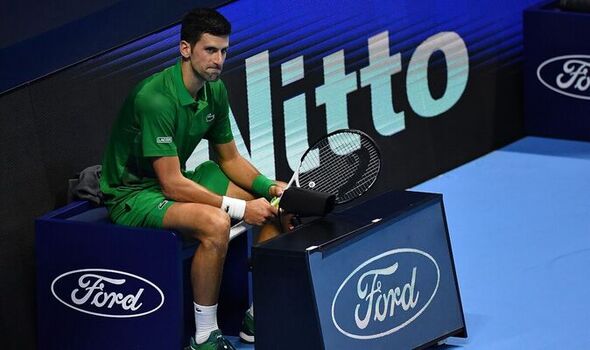 Novak Djokovic shut down a question about his physical struggles at the ATP Finals on Friday after he was seen shaking and doubling-over during his 6-3 6-7(5) 7-6(2) win over Daniil Medvedev. The world No 8 explained that he didn’t want to reveal anything that his opponents could learn about his state but vowed to do “everything he could” to recover in time for tomorrow’s semi-final.

Djokovic managed to outlast Medvedev in three hours and 11 minutes on Friday to end the round-robin stage of the ATP Finals with a 3-0 undefeated record. The seventh seed appeared to be cruising to victory before he was dragged into a second set tiebreak, where he doubled over at his bench midway through and could be seen violently shaking as he towelled off during the changeover after losing the breaker.

Despite calls to retire the match and preserve himself for Saturday’s semi-final against Taylor Fritz, the Serb hung on and came from a break down in the final set to win. But he refused to give away any insight into his physical state when probed after the match.

“There was a lot of different things,” he confessed after the three-set battle. “But I’m not going to go into details about it because I just don’t feel it’s a place for me to share that because why would I?”

While Djokovic was happy to admit he struggled, he didn’t want to give anything away with his semi-final imminent. He added: “I don’t want to reveal what I’m going through exactly to my opponents.

“Everyone has one of those days where they struggle more physically. For me that was today. I’m very proud to be able to find a way, because that’s what we are I think owing to ourselves and to the team and to the people who come and watch you, is to always try to give your very best in that given moment.”

The five-time former champion at the ATP Finals was also asked if he had any worries ahead of his match against Fritz, and he joked: “Well, I’m not the freshest guy right now talking to you as I was maybe yesterday.

“On the physical side, I’m not worried because, I mean, worry just depletes you of the vital energy you need. If something happens tomorrow in a good or bad way, it happens and I have to deal with it then tomorrow.”

Djokovic was also hoping that he would bounce back as he has done in the past as he vowed to do everything he could to be ready. “I’m going to do everything I possibly can today with my physio, with myself, with my team in order to get the good rest, the good recovery,” he continued.

“I have things that have always been part of my routine. I know what I need to do. I’ve had many cases in my life before where I managed to recover very quickly. Hopefully that’s going to be the case again.”