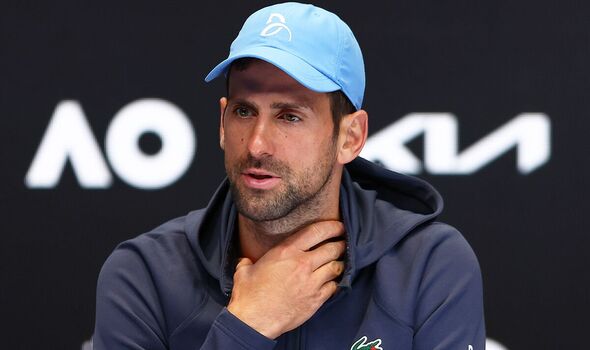 Novak Djokovic has made a concerning admission over a hamstring injury he has been suffering from of late. The Serbian says he is struggling ahead of the Australian Open starting on Monday.

Djokovic got through an exhibition match against Nick Kyrgios on Friday. He appeared to dispel doubts over his fitness after pulling out of a training session earlier in the week.

But speaking to the media on Saturday, he admitted it was still a cause for concern. The 35-year-old is hopeful it will not cause him a problem over the next couple of weeks in Melbourne, with Roberto Carballes Baena his first-round opponent on Tuesday.

Djokovic told reporters: “Well, I’ve been struggling with that a bit, to be honest, the last seven days. But it’s hopefully not the major concern.

“So far I’ve been able to train, compete and play points, practice sets. So that’s a positive sign.

“Obviously, I’m being a bit more cautious. I’m not going full out on the training sessions, conserving the energy for next week. Hopefully it won’t cause an issue for me then.”

Djokovic is one behind Rafael Nadal’s men’s record of 22 Grand Slam singles titles. He admits chasing the record is a big motivation for him heading into the first major of 2023.

He added: “Of course, it is. I mean, that’s why I keep on playing professional tennis, competition tennis, because I want to be the best, I want to win the biggest tournaments in the world. There is no secret about it.

“It doesn’t get bigger than this. You have four slams that historically have been the biggest events in our sport. It’s also one of the biggest reasons why I was really looking forward to come back to Australia: because of my record here.

“I really love playing in Rod Laver Arena, particularly night sessions. I’ve had plenty of success that hopefully can continue this year.

“I’m in a very good shape. I ended the year in the best possible way, and continued that form in Adelaide. I like the way I played there. I beat some really good players, especially in the last few matches of the tournament.

“I like my chances. I always like my chances. I train as hard as really anybody out there. There’s a lot of youngsters now that are very hungry, that want to win. They want to take a scalp off you on the big stadium. I know that.”