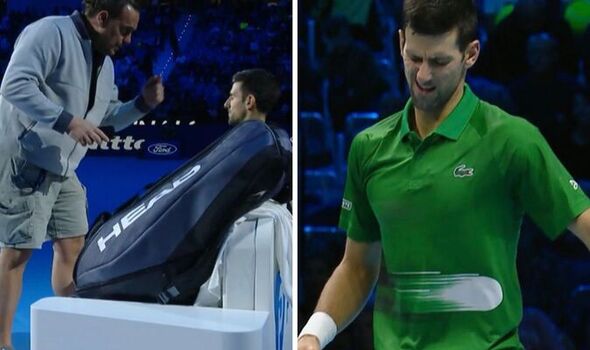 Novak Djokovic was forced to run off court in Turin after suffering an issue with one of his contact lenses. The Serb called someone to court during the changeover at 4-5 in the second set after failing to break Daniil Medvedev as he requested eye drops before being forced to leave the court entirely to resolve the problem.

Djokovic suffered a problem with one of his contact lenses mid-match while contending his final round-robin clash of the week against Medvedev. The world No 8 was leading by a set and had break point at 4-4 on the Russian’s serve but failed to capitalise, and could then be seen squinting as he struggled with his eyes.

As the pair sat down for the changeover with the fourth seed leading 5-4 in the second, Djokovic requested someone come to the court for eye treatment as chair umpire Mohamed Lahyani could be heard requesting eye drops for the 35-year-old. And the five-time ATP Finals champion could then be seen springing to his feet and running off as he gestured to his box to come and help him by going down the tunnel to leave the court.

It left the 26-year-old sat on his bench and waiting for his opponent to return, as Medvedev could be seen bopping his head to the music while the DJ kept the Pala Alpitour crowd entertained in Djokovic’s absence.

The issue came at a tricky time for Djokovic, who was about to serve to stay in the second set. He emerged more than six minutes later and immediately found himself facing a set point at 30-40 as he struggled to regroup following the problem with his contact lens.

Two more set points came and went for the Russian as the 21-time Grand Slam winner managed to save the final one with a huge forehand winner at the end of a 26-shot rally, getting the Turin crowd on their feet as Prime Video’s Mark Petchey branded it the “rally of the tournament”, with Djokovic regrouping to hold in eight minutes.

For the latest news and breaking news visit: express.co.uk/sport