Davis Cup newcomer James Duckworth says Australia captain Lleyton Hewitt is keeping his cards close to his chest about who will get the nod in his under-strength team for this week’s tie against Brazil in Adelaide.

The Australian team has been rocked by the loss of highest-ranked players Alex de Minaur and Nick Kyrgios through injury, with Alex Bolt and doubles specialist John Peers added for the Memorial Drive clash on March 6-7. 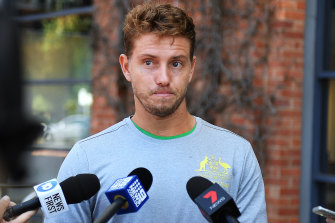 James Duckworth is hopeful of gaining a start for singles in Australia’s Davis Cup tie against Brazil in Adelaide.Credit:Getty Images

The winner of the tie will advance to the Davis Cup finals tournament in Madrid in November.

On ranking, John Millman (No. 43) and Jordan Thompson (No. 63) would get the nod for the singles matches ahead of No. 83 Duckworth, but the 28-year-old Sydneysider remains hopeful of a debut after arriving in career-best form.

Previously named in Australia’s squads against Germany in 2012 and Slovakia in 2016, Duckworth made his first ATP Tour semi-final in Pune, India, in early February before winning a Challenger event in Bengaluru a week later.

‘‘I’ve been playing some pretty good tennis so I’m really excited to get the call-up,’’ Duckworth said. ‘‘We are all playing a mix of singles and doubles at training and, apart from John, could all play that [doubles match] so there’s a few options. We’re all playing pretty well.

‘‘Practice matches will be taken into consideration, and also form over the last few weeks and what the coaches are thinking match-up wise.’’

Brazil’s team will include exciting teen Thiago Seyboth Wild, who won an ATP title last month in Chile, and will be anchored by world No. 82 Thiago Monteiro.

Experienced pair Bruno Soares and Marcelo Melo are ranked in the top 25 in doubles.

Seyboth Wild became the youngest Brazilian title-winner and the first teenager to lift a tour-level trophy since De Minaur triumphed in 2019 in Sydney. He leapt 69 places to world No. 113 on the back of his win over world No. 38 Casper Ruud, of Norway, in the final.