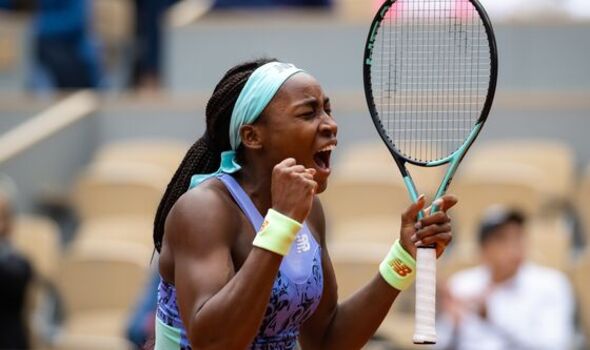 Teenage star Coco Gauff is drawing on the inspiration of Emma Raducanu’s incredible US Open win as she targets a fairytale of her own at the French Open. Gauff, 18, took on Belgian player Elise Mertens in her last-16 match on Sunday, and was in inspired form as she swept her opponent aside 6-4 6-0.

She’s no stranger to reaching the latter rounds of a Grand Slam, having made the same stage at Roland Garros in 2021. She was also a quarter-finalist at Wimbledon last year and will have the chance to go one better this year when she faces Sloane Stephens on Tuesday.

The draw has opened up in Paris following surprise defeats for Aryna Sabalenka and Paula Badosa on Saturday – whilst defending champion Barbora Krejcikova and Wimbledon runner-up Karolina Pliskova are also out. It has seemingly paved the way for world No 1 Iga Swiatek to repeat her triumph of two years ago.

But Gauff cited the example of Raducanu’s triumph at Flushing Meadows, which saw her become the first qualifier in history to triumph at a Grand Slam, as a reason to believe in herself in the coming week. And after beating Mertens, she said other players will be thinking the same.

“I’m thinking, especially if the US Open taught us anything, that anybody can win on any day,” Gauff told reporters. “I think all players should really go into the match thinking about that. I think for me I’ve always believed that I could go far, but for other players I think so as well.”

Gauff will now face compatriot Stephens, the 2017 US Open champion, in the last eight. And she implied that every player, aside from Swiatek, will be eying an unlikely win: “In this tournament, both sides of the draw, with the exception of Iga, there are a lot of lower-seeded and lower-ranked players still left in the tournament.

Raducanu herself exited in the second round of her first French Open, beaten by Aliaksandra Sasnovich. She will now continue her search for a new coach, having parted company with Torben Beltz.