Coach of tennis player disqualified for mid-match shower speaks out

The coach of Nicolas Moreno De Alboran, an American tennis player who was disqualified from the ATP Challenger tournament in Seville for taking a shower mid-match, has claimed his student is “totally incident” of any wrongdoing. World No 311 seed Moreno De Alboran was ejected from the competition after allegedly undertaking an unauthorised wash in order to remove sand from his body during his clash with Federico Delbonis.

With the match level at one set apiece, the 25-year-old claims to have turned the shower on during a toilet break so as to wash away sand from the clay court which was causing a rash in the soaring Spanish heat. However, Moreno De Alboran was then eliminated from the ATP Challenger tournament by officials who were informed of the illegal shower break by opponent Delbonis, who followed his rival into the changing room.

Opening up on the bizarre episode, Moreno De Alboran’s coach Javier Marti insists his disciple is “totally innocent” of any wrongdoing. Marti told puntodebreak.com: “Between the second and third set, Nico went to the bathroom. Since he had fallen several times, his entire lower body was covered in clay.

“Instead of just towelling off, he stepped into the shower, grabbed the shower head, and ran water to remove the clay. At that moment, the referee inspected the changing room area after Delbonis told him that Nicolas was taking a shower.

JUST IN: Nick Kyrgios given £12,000 fine for racket-smashing antics in US Open 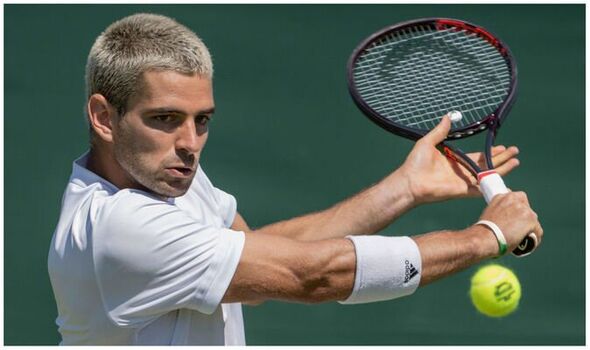 “The reality is that he wasn’t showering in the true sense of the word, he was just cleaning himself off in the shower cabin. He is totally innocent, but this is what happened. This is the first time something like this has happened to me as a coach, and it’s a shame because it was a great game, especially at the end.”

Following the controversial incident, Moreno De Alboran himself took to Instagram to defend his actions. The New York product wrote: “During the second set, I fell over 3/4 times. On one of them sand got inside my underwear. I had to play like that for 30 minutes and it was giving me a rash that started bleeding after a while.

“When I won the second set, I went to the toilet to change (you get five minutes). When I saw that I couldn’t get the sand off with the towel since I was sweating so much. I decided to use the shower handle to only rinse the sand off. 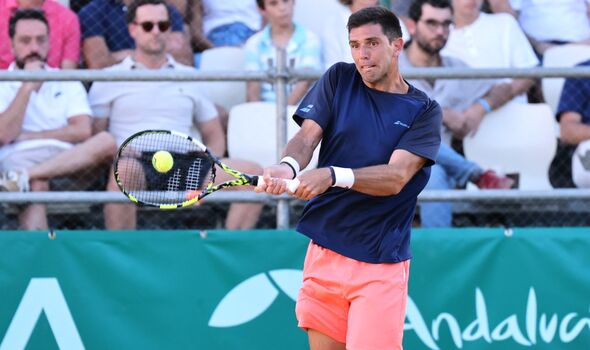 “My opponent told the umpire that came to the bathroom with us with us that I had taken a shower (which you are not allowed to do). The tournament referee then proceeded to default me from the tournament.

“On top of that, I will not receive the points or prize money from the tournament, and will have to pay my hotel room for the days that I was playing in the tournament. This has nothing to do with the tournament or its organisation which was incredible all week long.”