‘It’s sad we gave all our opinions… and then they changed it to this’: Two-time winner Tomas Berdych criticises new Davis Cup revamp – and former World No 4 talks of ‘no shame’ despite career of near-misses and no majors

In dwelling on where to conclude his career in late-2019, Tomas Berdych mulled over one last hurrah in his favourite event. However, his time pondering was brief.

The Davis Cup was holding its inaugural finals event in Madrid following a revamp of the so-called World Cup of Tennis. But Berdych, a two-time winner with the Czech Republic, passed up the opportunity. Simply put, he is a traditionalist.

Two years on, with the latter stages of this year’s tournament ongoing and speculation rising of the finals moving to Abu Dhabi in a money-spinning move, the 2010 Wimbledon finalist had some stern words for the decision-makers: ‘I spent so much time with the ITF on this. They asked many questions, blah blah blah, and then they changed the format this way. 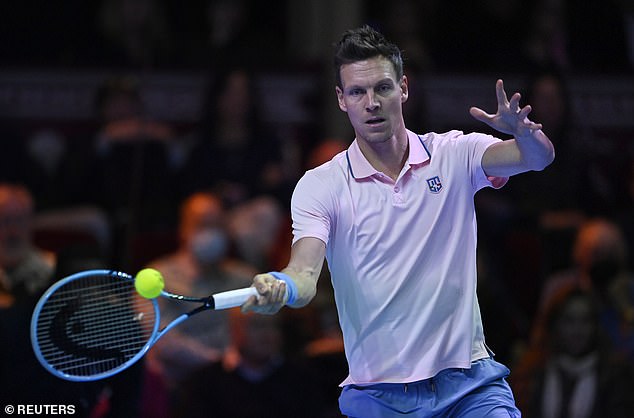 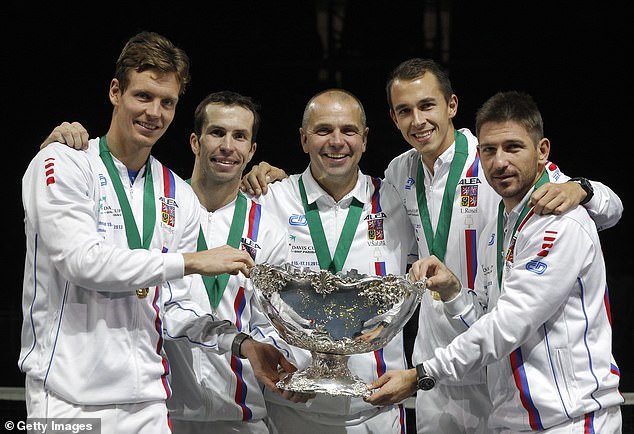 ‘I haven’t heard many players for it. It’s sad that we all gave our time and opinions to them and they went with this in the end.’

Berdych, a top-10 player for eight years running and a semi-finalist at all four Grand Slams, was not short of an rescheduling template which, to the naked eye, seemed sensible and effective.

‘If the Davis Cup happened every two years, everyone would be crazy about it,’ he told Sportsmail, at the Champions Tennis event at the Royal Albert Hall last week.

‘The winners really would be like the world champions because it’s more unique. You can find the dates in the year for the final to be in September (as opposed to the current date, in December) and then I think more players would sign up. Then it really would be very special.

Now though, that’s a problem for the stars of today, of which Berdych is no longer one. Somewhat surprisingly, having been a Wimbledon semi-finalist just two years earlier, he called it a day in November 2019 amid persistent back and hip issues. 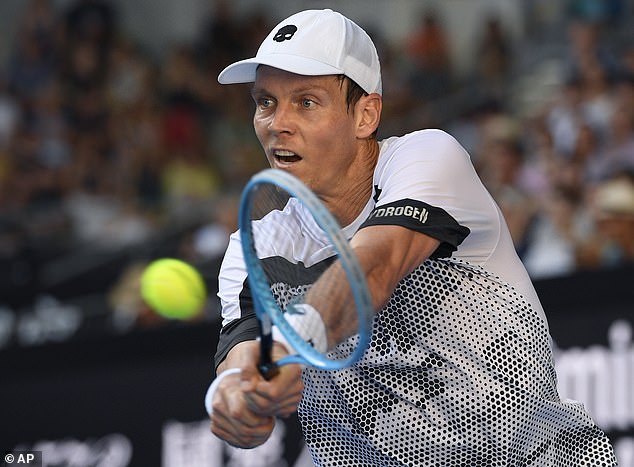 With the likes of Rafael Nadal, Novak Djokovic and to a starker extent Roger Federer all continuing into their late 30s, the former World No 4 went somewhat against the grain by hanging up his racket at the age of 34.

Not an ounce of regret, though: ‘I think I nailed it at the perfect spot. If you keep pushing over a certain period, especially at the end, it could change your view of your whole career.

‘I’ve never had a doubt for a moment. I woke up that morning and thought: that’s it.’

No qualms about the end of his career, but what about those moments which passed him by during a distinguished 15 years on tour?

There was a one-sided Wimbledon final in 2010 against Nadal – Berdych’s only Grand Slam final – and numerous near-misses against Messrs Federer, Djokovic and Murray too. A career final record reads: won 13, lost 19. 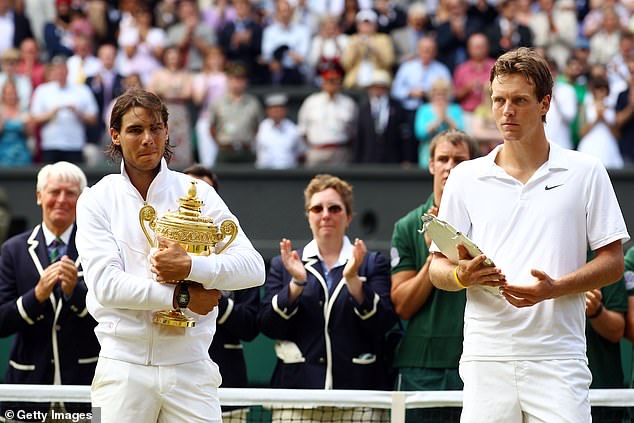 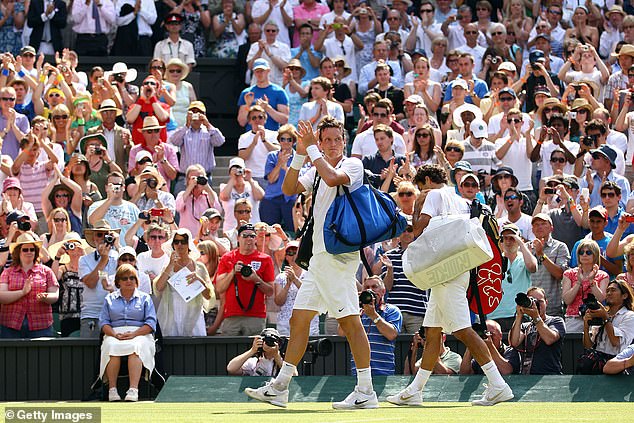 ‘I’m not ashamed of the matches where I probably should have done something different or achieved something more,’ he says, defiantly.

‘I look at it the other way. There are matches which stay in mind, like the second round at Wimbledon (in 2010) when I was two sets to one down against Denis Istomin.

‘I had some stomach problems and spent about 20 minutes in the toilet! It was terrible, but I didn’t want to let the moment go. I came back, won in a fifth set and then reached the final, beating Federer and Djokovic.

‘I had a pretty successful career. I am absolutely at peace with myself.’

Nor does he feel any resentment playing in an era of history-makers. After all, being regularly foiled by the Big Three – he adds Murray and Stan Wawrinka into the mix too – must have been close to sole destroying. 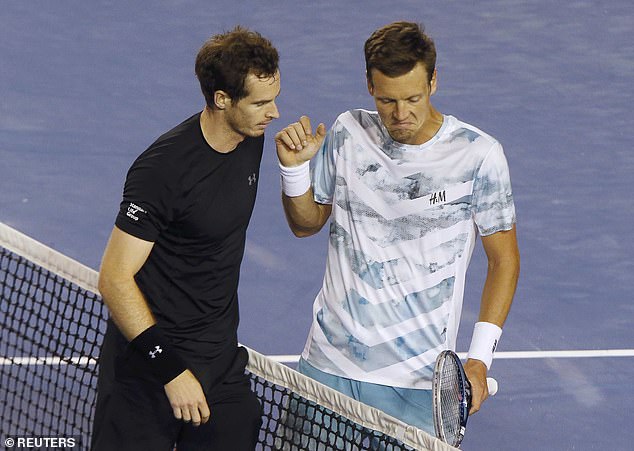 The best of the rest. He won 13 career titles in the end and admitted he ‘probably’ would have cracked that elusive Grand Slam amongst this current generation of players – yet again opts to look at his situation differently.

‘I’m a very realistic person, I take things black and white. The main reason I actually think I was so successful was because of those guys because they bring the level so high that if you don’t squeeze enough out of yourself, you have no chance to compete with them.

‘It goes hand in hand, maybe if I was playing these days and the level was not that high, who knows? This kind of hypothetical judgement is difficult to say. Probably yes.’

To the present though and a life where the Czech accepts he is more than content without the rigours of journeying on tour.

He only picked up a racket again two months ago in preparation for competing ‘for fun’ last week, where he came up against the likes of old foes David Ferrer and Marcos Baghdatis at the Royal Albert Hall, with the iconic venue hosting Champions Tennis for the last time in its 150th year. 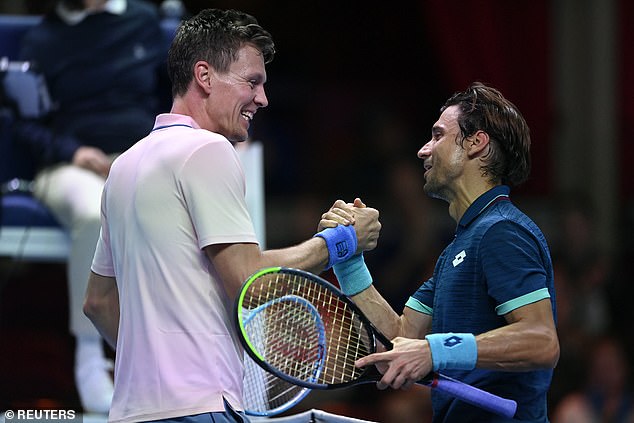 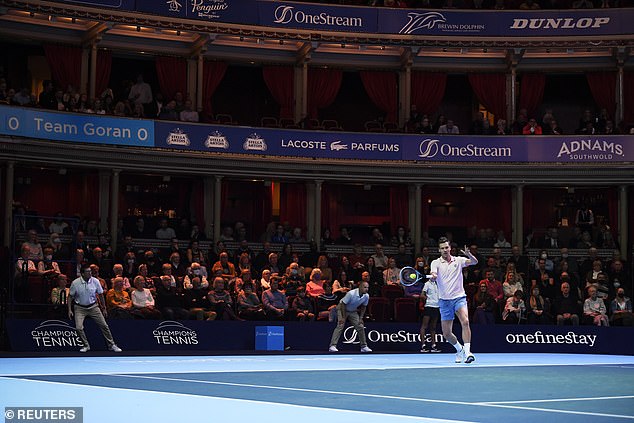 Berdych does not rule out a return to the tour down the line, whether it be as a coach or a tournament director.

‘Those thoughts go through your mind. But I just don’t feel committed right now to something which would need my time. Not right now.’

After a singles career just 18 of short of 1,000 matches – and close to $30m in prize money collated – who can really blame him?