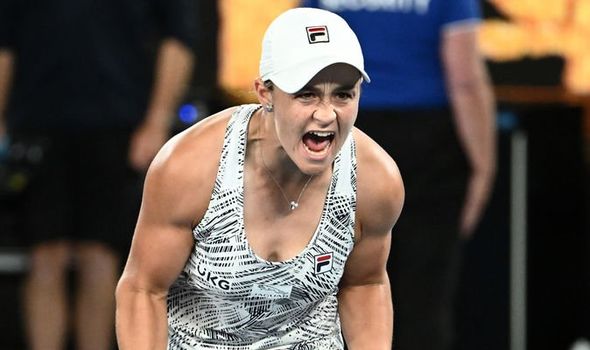 Ash Barty fought off a feisty Danielle Collins to break a 44-year home hoodoo and win the Australian Open singles title. The American world No 30 clashed with the noisy home crowd as she took a 5-1 lead in the second set. But the world No 1 responded by winning the next four games and claiming the tiebreak to win 6-3, 7-6 to allow the Barty Party to get started.

Her success was cheered on by fellow Aussie sporting royalty Rod Laver, Ian Thorpe and Cathy Freeman in an ecstatic Rod Laver Arena.

Barty is the first home winner of an Australian Open singles title since Chris O’Neil in 1978.

In 2013, Andy Murray ended the 36-year wait for a Wimbledon title since Virginia Wade triumphed in 1977. Now the French have the longest barren streak since Mary Pierce won at Roland-Garros in 2000.

Wimbledon champion Barty has now claimed three major titles after claiming her first at the 2019 French Open and is the undisputed best female player in the world.

Both players had started nervously. Barty conceded the first break point with a loose forehand long in the fifth game but saved it with a forehand crosscourt winner.

By contrast, the American faced her first break point in the next game and sent down a horrible double fault to see the home favourite lead 4-2.

Serving for the set at 5-3, Barty took her first set point with an ace down the middle after 32 minutes.

The procession to the title was halted when Collins broke Barty’s serve in the second game of the second set when she put away a short ball at the net – and celebrated with her box and the few American fans in the crowd.

It was only the second time Barty’s serve had been broken all tournament. The top seed had two points to break straight back in the next game but slapped a backhand into net and then missed a backhand volley to see the American lead 3-0

When she next served at 3-1, Collins missed her first serve on the second point and a male voice in the crowd shouted: “That is two metres out”.

When Barty sent her backhand return into the tramlines on the second serve, the American turned and gestured to that section of the stadium how far out it was.

And when Collins, who has the Instagram handle @collinsdanimal, put away an overhead on the next point, she turned and fist-pumped in the same direction.

Barty, who went 63 service games unbroken before dropping her serve in the fourth round, was then broken for the second consecutive game after a double fault and a weak backhand to trail 1-5.

But then the momentum of the match changed again as Barty won the next four games to draw the scores level at 5-5. Collins successfully appealed to umpire Marijana Veljovic to ask the crowd for quiet during points as she was broken for a second time.

In the tiebreak, Barty raced to a 4-0 lead and took her first match point to claim the historic victory with a forehand cross-court pass after one hour and 27 minutes – and 44 years.