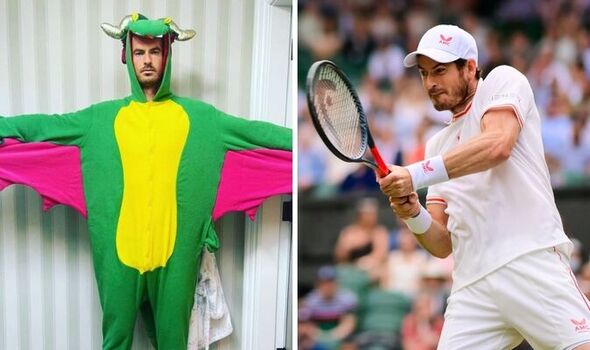 Andy Murray has learned his first opponent of the grass court season after sharing his unique build up for Wimbledon. The two-time champion at the All England Club has been training for a successful grass season and posted a photo in a new dragon outfit as he opened up on his “preparations” for his home Grand Slam tournament.

Murray will begin his grass season next week after snubbing the French Open to have more time to prepare for Wimbledon. The former world No 1 has entered the Surbiton Challenger and learned his fate in the draw as he will face world No 125 Jurij Rodionov in his opening match.

The world No 67 is the top seed at the tournament and is in the same draw as some of his fellow Brits Liam Broady and Jay Clarke, who will be facing each other in the opening round. It will be the three-time Major champion’s first competitive match on the surface as he looks ahead to Wimbledon, and preparations for SW19 are already well underway in the Murray household.

On Sunday, the 35-year-old shared a snap of himself in a dragon outfit, writing: “Preparation for @wimbledon going really well,” and adding a series of hashtags: “#tennis #dragon #wimbledon #kids.”

But before he returns to his home Grand Slam tournament – where he reached the third round last year – he will have to get past a successful Challenger Tour player in Rodionov, who recently overtook Dominic Thiem to become the Austrian No 1 in the 2020 US Open champion’s injury absence.

The 23-year-old already has two titles at Challenger level to his name for the season, including winning the tournament in Mauthausen, Austria earlier this month. He also picked up the title in Biel, Switzerland back in March.

The world No 125 has had less luck at ATP Tour level this year though, playing three matches and winning just one. His best showing was a second-round appearance at the Dallas ATP 250 in February where he came through qualifying and beat Maxime Cressy in the first round before falling to Vasek Pospisil.

The Surbiton Challenger opening round will be the first meeting between Murray and Rodionov but looking at his latest Instagram post, it appears the Brit is more than ready to breathe fire down the neck of his upcoming opponent.