Carlos Alcaraz has hinted at a changing of the guard within men’s tennis after defeating Jannik Sinner to secure his spot in the US Open semi-finals. The Spanish teenager declared that while Roger Federer, Rafael Nadal and Novak Djokovic remain “the best”, the likes of himself and Sinner have proven they are “the present” as well as the future of the game.

Alcaraz overcame his Italian opponent 6-3 6-7 6-7 7-5, 6-3 in a mammoth quarter-final encounter under the lights at the Arthur Ashe Stadium which lasted five hours and 15 minutes and finished at 2.50am local time. The 19-year-old made history on the night by becoming the youngest Grand Slam men’s semi-finalist since Nadal at the 2005 French Open and the youngest male to reach the last four at the US Open since Pete Sampras back in 1990.

Following his stunning success, Alcaraz indicated that this year’s tournament at Flushing Meadows could well be the catalyst in a changing of the guard within the men’s game. He said: “As long as Rafa, Djokovic, Federer are there, they will be the best and the rivalry they have between them will always come first.

“But today Jannik and I have shown that we are the present and that we also have a long career ahead of us. We are going to play many times together.” 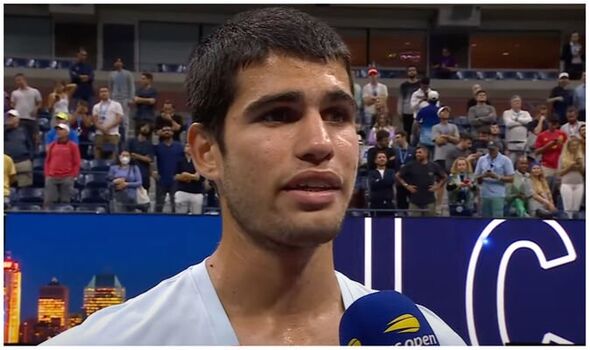 The ‘Big Three’ of Nadal, Djokovic and Federer have dominated the men’s game for the past two decades, claiming 63 of the past 78 Grand Slam titles, dating back to the 2003 Australian Open. However, none of the trio will be contesting Sunday’s US Open final in New York.

Nadal, who is continuing to recover from an abdominal injury which saw him withdraw from Wimbledon ahead of a semi-final meeting with Nick Kyrgios, saw his bid to claim a 23-career Grand Slam title ended by home favourite Frances Tiafoe at the round of 16 stage earlier this week. Meanwhile, Djokovic was denied entry to the US due to his unvaccinated status while Federer is continuing his rehabilitation following knee surgery last year. 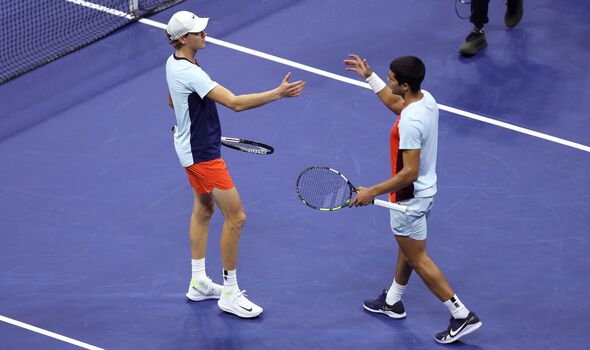 Following his epic victory over Sinner – a classic in which the pair both had opportunities to win – world No 4 Alcaraz declared his performance as the best of his life. He admitted: “I would say it was the best match I’ve played in my entire career.

“At five hours and 15 minutes, from the first ball to the last, there was immense quality from both Jannik and me. Jannik and I will remember this for the rest of our lives.”