Australia’s unlikely Twenty20 hero Matthew Wade has set himself the goal of a World Cup swansong at home next year, as stories emerge of the physical toll the team’s success had on players.

Skipper Aaron Finch has revealed he aggravated his knee injury during the tournament, while Wade’s position in the side was in doubt on the eve of the final after a last-minute injury at training.

An empty MCG formed the backdrop as Finch, Wade, Glenn Maxwell and Marcus Stoinis marked the belated arrival of the men’s Twenty20 World Cup on Australian soil on Thursday. The team already has its sights set on its title defence in 12 months’ time.

Highly respected for his ability to play through pain, Wade carried a grade two side strain into the final after hurting himself in the nets. Forced to have a scan by doctors, Wade asked not to be told of the results – a similar approach adopted by Brad Haddin, who said on a Test tour in 2014 that scans only rule you out, not in.

He was not confident he would be fit until the morning of the game. Under the new ICC rules, Australia could have replaced Wade behind the stumps with back-up wicketkeeper Josh Inglis.

“It was all about how I woke up. If I woke up worse, and I couldn’t swing the bat, then I wouldn’t have played. I wasn’t 100 per cent sure,” Wade said.

“I was worried more that if we batted first, and I had to go as hard as I could if I tore it then, then I wouldn’t be able to keep and that would hurt the team a lot.”

Wade has declared he will bow out of international cricket after the 2022 tournament and is aiming for a fairytale farewell.

It has been a running joke among the national team that Wade believes every game will be his last for Australia, but this time the Tasmanian is for real.

“Once the dust settles a little bit with this one, I think that will be the next motivation – to get to the next World Cup and hopefully defend the title here, and then I can sail off into the sunset,” Wade said. 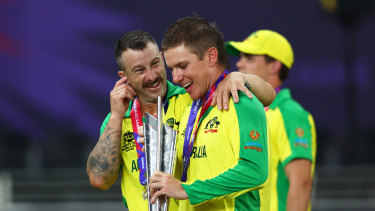 “I certainly won’t be playing beyond that point.”

After playing a devastating knock to surge Australia into the final, Wade deserves to keep the gloves for the next Twenty20 series, but competition is fierce, with Josh Inglis, Josh Philippe and Alex Carey waiting in the wings. At 33, Wade knows the time is coming to pass the baton.

“Thankfully I could do what I did at the last World Cup and hopefully that gives me enough credit to get another crack at it next time,” Wade said. “Those guys are good players are going to be good players for a long period of time, and they’re going to need some exposure at international level at some stage.”

Finch said he had been limited in his movements due to a knee injury which required surgery leading into the tournament. It may help explain his run of outs late after several key innings as Australia revived its campaign.

He is now in a race against time to be fit for the start of the Big Bash League with the Melbourne Renegades, who have announced Nic Maddinson as their new captain after Finch stepped down from the post.

“I probably need a little bit of extra time to get my knee right now. I pushed the rehab really hard and probably paid the price for it a little bit throughout the tournament,” Finch said.