Trainer denied return to racing due to ‘history of dishonesty’ 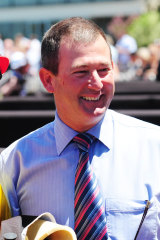 The Victorian Civil and Administrative Tribunal has reaffirmed Racing Victoria's decision to deny Mark Riley a return to the training ranks based on his poor disciplinary record and his history of dishonesty.

In September, Racing Victoria’s licensing panel declined Riley’s application to return from a three-year doping disqualification on the grounds he failed their character test as a "fit and proper" person to work in racing.

Riley's past is littered with indiscretions, but the former Mornington trainer asked for one more chance and was supported in a letter from the Australian Trainers' Association as well as references from industry participants Gerard Hyland and Robert Dunnett.

But RV made written submissions, which included two sections headed 'History of lies and lack of candour' and 'Failure to accept responsibility for conduct or its seriousness', urging the VCAT senior member to affirm its decision.

Riley was also fined in 2000, 2015 and 2016 for presenting a horse to the races with a prohibited substance in its system.

VCAT senior member Anna Dea dismissed Riley's appeal to return to racing on Thursday, writing in her decision that he had failed to accept guilt for his priors.

"I cannot be confident that he has reviewed his own conduct sufficiently to be relied on to be compliant with the AR [Australian rules], open and honest with the regulator and the stewards in the future and willing to accept their decisions," she wrote.

"As Mr Riley continues to dispute or minimise past findings against him, I am not satisfied he has demonstrated an understanding about the particular need for licensed trainers to meet the high standards of integrity which are reflected in the AR given their responsibilities, role and obligations.

"For these reasons, in my opinion Mr Riley's conduct or character is not in accordance with that which is expected of a licensed person and so Mr Riley has not satisfied me he is a suitable person to be licensed."

Riley argued that Nikolic's priors, which included a criminal history of violence and disregarding court orders, were entirely different to those on his record, but Dea believed there were enough comparisons to also deny Riley a return to racing.

"One of the factors in this tribunal's decision as to whether Mr Nikolic was fit and proper was that he was found to have lied giving evidence before both the RADB [Racing Appeals and Disciplinary Board] and this tribunal," she wrote.

"That aspect is common to Mr Riley's past conduct.

"The factor that weighs most against the positive is Mr Riley's history of dishonesty in his dealings with stewards and various disciplinary tribunals."

Riley has an option to appeal the decision.