Tips and race-by-race preview for Sapphire Coast on Sunday

1. Harley Street gave a sight at Moruya at his first run for Natalie Jarvis. He’ll come on from that outing and had previously run second to Mabel at Muswellbrook. Should hold the front and has more race experience than his obvious threats.
Dangers: Debutant 3. Don’t Thinkaboutit really caught the eye in a trial behind proven sprinter Island Bay Boy. 9. Stone Lizzie also impressed in her one barrier trial at Kembla Grange.
How to play it: Harley Street WIN
Odds & Evens: ODDS 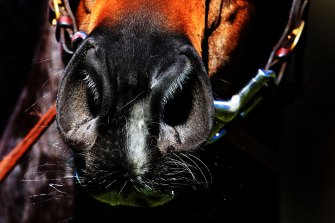 There is an eight-race card at the Sapphire Coast on Sunday.Credit:Jenny Evans

6. Millime was too bad to be true a fortnight ago when running last as the heavily backed $3.10 favourite. Won at this track the start prior in impressive fashion and if she can find that form again, and the barrier gives her every chance, she’ll be hard to beat.
Dangers: 1. Cecil Street Lad has a class edge on these but as if lumping 65.5kg wasn’t hard enough, he’s come up with a wide gate too. 4. Grand Lusitano comes out of a hot race at Moruya where the track record was broken.
How to play it: Millime EACH WAY
Odds & Evens: SPLIT

6. Densaur gave a sight first up at this track before he was deep ended in a Warwick Farm maiden. He sat outside of Publicist and couldn’t go with the winner late but held down third comfortably and the second horse has since won too.
Dangers: 3. My Alma is also trained by Theresa Bateup and could improve sharply on top of the ground. 1. Bobsled brings solid Victorian form which makes him hard to line up but he’s in the mix.
How to play it: Densaur WIN
Odds & Evens: SPLIT

3. Foxtrot Bravo was never in the race at Wyong last start, drifting back to last from a wide draw. That was despite being a single figure chance. His form prior to that was rock solid. Expect him to take up a more prominent position, which could see a sharp turnaround in form.
Dangers: 2. Marakopa’s recent form doesn’t look like much on paper but those runs have all been in much better company than this and he wasn’t beaten all that far. 5. Leather Jacket Lew is a stayer still with upside and he’ll roll forward.
How to play it: Foxtrot Bravo WIN
Odds & Evens: SPLIT

3. Cavalier Charles is a lightly raced five-year-old not short on talent. He was sent around a $2.60 favourite in Highway Handicap company last preparation but he bled and pulled up lame. Forget he ever ran. Matt Dale has placed him well to bounce back first up.
Dangers: 4. Shelby Sixtysix has been mixing his distances, and his form a little, but want to be very forgiving of his last start 11th when shuffled back throughout. 1. Fatigues resumes having just missed at Flemington the last time we saw him at the races.
How to play it: Cavalier Charles WIN
Odds & Evens: SPLIT

2. Bombdiggity is costing himself with tardy getaways but the six-year-old is absolutely flying at the moment. If he jumps clean, travels just in behind the speed and lets down like he has all preparation, he’ll take a power of beating.
Dangers: 4. Mr Magical found 1000m too sharp first up and never got into the race. Expect him to bounce back over 1200m from the inside draw. 1. Peyton Place is very fast and very classy but he comes back in trip and will have company up front.
How to play it: Bombdiggity WIN
Odds & Evens: EVENS

5. Room Number backed up a Canberra win with an unexpected victory at Randwick as a $61 pop. She didn’t just win though, she shot clear late to beat And We Danced. If she holds that form she’ll win this too and make it three on the bounce.
Dangers: 3. The Guru will park in behind what should be a truly run race and get his chance. 14. Sally Pops is a knockout hope with plenty of speed engaged and drawn soft. Like the form lines she brings into this.
How to play it: Room Number WIN
Odds & Evens: ODDS

12. Lady Tabloid looked the winner at Wagga three weeks ago but just laboured a touch late on the Heavy 10 track which proved costly. Trainer Nick Olive has found a lovely race for the four-year-old here and she looks the likely leader again.
Dangers: 8. Bella Broadway has won two of her four starts for Danny Williams. She has previously failed at this trip but the timing is right to try again. 5. Brainzes is chasing three straight wins.
How to play it: Lady Tabloid WIN
Odds & Evens: EVENS