The A to Zaaki of Cup week: Top jockey McDonald secures a record 10th victory

Australia’s leading jockey James McDonald will go down in Melbourne Cup Carnival folklore after breaking the record for most wins in a Cup week, bringing up his 10th winner in the Mackinnon Stakes on Zaaki.

McDonald was most looking forward to partnering Zaaki in the Cox Plate when he made the decision to drive with Hugh Bowman to Victoria and quarantine for six days ahead of the Moonee Valley weight-for-age championship.

But the short-priced favourite was withdrawn on the morning of the race, leaving McDonald without a ride in the $5 million race. 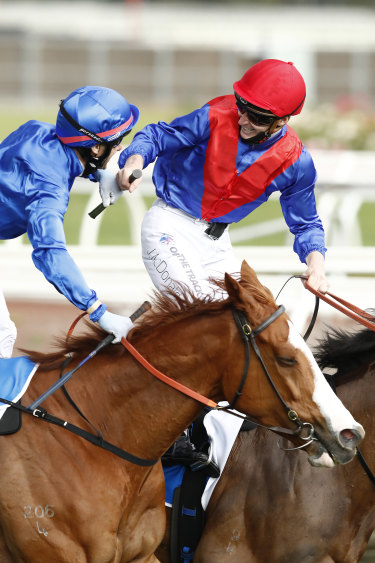 But the Sydney star put that all behind him this week, riding a record 10 winners including four group 1 wins – first the Coolmore Stud Stakes on Home Affairs, and then the highlight, of course, the Melbourne Cup on Verry Elleegant.

There were only two group 1s on the final day of the Cup carnival, but McDonald claimed both; first, the VRC Sprint on Nature Strip before claiming the Mackinnon Stakes on Zaaki.

Fittingly, it was Brett Prebble who crossed the line in second on Cascadian. Prebble – an idol of McDonald’s growing up – recorded nine Flemington carnival wins in both 1999 and 2000, and held the record for more than 20 years.

“He’s a legend, isn’t he,” Prebble told The Age of McDonald.

“He’s beaten my record, but there’s no one more fitting to do it. He’s a lovely person, a champion jockey, and he’s going to set all the records around Australia for years to come. He’s 29 years of age and, bless his heart, he’s a great person and good on him.”

McDonald said it was a thrill to claim the Cup week record.

“It is probably my greatest three weeks in the saddle. It started with The Everest, and it comes down to this fantastic carnival,” he said.

A young James McDonald with his idol Brett Prebble in 2005.

“[The week] started off with the Coolmore domination and then the Holy Grail, which was the most special one, and then capitalise on two more today.”

And McDonald said it was even more thrilling to share a hug with Prebble past the post.

“It was awesome … that was really special to share that moment with him,” he said.

“Obviously you’ve seen a picture of me next to him 20 years ago and to obviously compete against a great calibre of riders in this jockeys’ room over this carnival is something special.”

The victory was trainer Annabel Neasham’s first at Flemington and her fifth at group 1 level. Zaaki now has provided three of those, with the other two coming from stablemate Mo’unga, who finished third in the Mackinnon.

“He’s a dominant horse and that’s what he can do when he’s in the zone,” McDonald said.

“It’s a shame for the connections obviously to miss two weeks ago, but as they say, that’s racing. But I give credit to Annabel, she’s persevered, she got over that little hiccup and moved on and she’s got a great race today.”

Neasham said it was satisfying to see the horse perform the way he did.

“I was so nervous beforehand. It’s so good for the team, Todd and Raphael who have been down here for six weeks and still running the show back at home, it’s a good team effort,” she said.

“He ran it right through the line. I just needed a bum to get me into the race, but I didn’t have one,” he said.

“If I had that I definitely would have frightened him. I mightn’t have beaten him, but I would have eyeballed him for a long time.”