A temporary stand collapsed, a large portion of a sightscreen disappeared and broadcast cameras were knocked over by a violent storm that delayed day two of the Galle Test match.

Winds of up to 60 kilometres per hour lashed the stadium on Thursday morning, causing the collapse of the stand about an hour before the scheduled start of play. 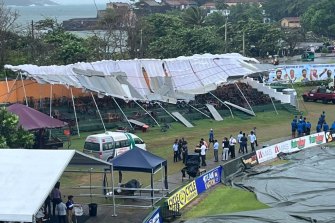 The collapsed stand at Galle after wild weather on the morning of day two of the first Test between Sri Lanka and Australia.Credit:Adam Collins

The extreme conditions also wreaked havoc on the vast gantry at the fort end of the ground, stripping it of about a third of the sightscreen and knocking over broadcast and ball-tracking cameras carefully calibrated to cover the game and be used by the umpires for decisions.

After waiting in the dressing room for most of the morning, Australia’s players briefly decamped to the team bus to return to their hotel amid initial estimates that the ground would not be ready for play before at least 2pm local time.

However, after consultation with the umpires and the match referee, India’s Javagal Srinath, the players returned to the change room in anticipation of a re-start as early as 1pm local time (5.30pm AEST). The collapsed marquee of the temporary stand remains untouched.

Sri Lanka’s department of meteorology issued a warning on Thursday for high winds across the south-west portion of the island, stating that the risk of damage was high and advising residents to “take action”.

Australia are currently 3-98 in pursuit of Sri Lanka’s first innings of 212.