Rival Canberra stables fine-tuning with plenty to prove next week

In fact, the meeting is almost serving as a fine-tuning exercise for several stables less than a week out from the big Black Opal Stakes and Canberra Cup carnival. 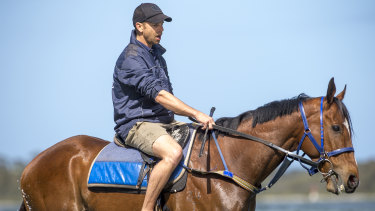 Heading the charge is Dale's high-class stayer Shangani Patrol, who hasn't raced for more than six months and comes in without an official trial. But the six-year-old son of former Victoria Derby winner Helenus has plenty of residual class from last winter when he was narrowly beaten in a BM 70 at Warwick Farm before an impressive BM 64 win at Sandown.

At the other end of the scale, stablemate Rinviata is well into his current preparation, and looking to recapture the form of four runs back when he bolted in a BM 70 at Gosford. Meanwhile,  five-year-old top-weight Animalia, who is based at Moruya, will need to improve sharply after being well beaten first-up at Wagga.

But seemingly, consistent Goulburn gelding Common Purpose looks the one to beat despite failing in the much tougher Country Championship qualifier at Moruya a fortnight ago. Before that he finished OK as a well-backed favourite in the feature SummerSprint at Wagga before being beating under a length in a BM 70 at Canterbury.

Earlier on the card, rival Canberra yards can make a statement and a form pointer for future races.

Progressive mare Rosebank looks a stand-out good thing in a moderate opener for the Luke Pepper stable before the Joseph and Jones camp aims to break through with promising filly Smartkap, who flew home into a place on debut at this track over the same short journey.

And out to join the Canberra invasion, five-year-old Costa Chin Chin can finally breakthrough at his 10th start for the Rob Potter yard and avenge a narrow loss here three runs back when he threw the race away laying in over the final 250m.