Even with the spark added by usual reserve-graders including Koby Jennings, Jess Taylor and Kirsten Buchanan, Royal Randwick on New Year’s Day was a big yawn – hardly the situation at Hanging Rock’s corresponding meeting in Victoria.

Obviously, the Australian Turf Club has lost interest in holiday racing, with the opening 2022 program lacking the substance of a normal Saturday and the Kensington circuit another negative for most punters. 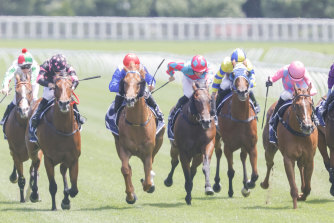 In Melbourne, the Victoria Racing Club maintained tradition at Flemington and had a strong line-up featuring two listed events, the Bagot and Chester Manifold, brought forward from later in January.

Some horse-players regarded the lack of top jockeys – either engaged at Doomben, suspended, or out due to COVID – as another downer at Randwick. But the standard of the saddle standard was still strong enough.

Jennings rated Moonshine Lady perfectly in the Real Estate for the Wyong-based Buchanan who tuned her for a first-up success after nine months. Well done.

Taylor looked good getting Nikohli Beagle home in the Midway while the view that the Sydney apprentice ranks are very strong was confirmed with the double by Tyler Schiller and Tom Sherry, who scored on Kirwan’s Lane (Maroubra) for John O’Shea.

The trainer also won with I Am Lethal, a strong type worth following despite the Petaluma being only a 72-benchmark grade.

Again Saturday’s two-year-olds failed to impress. Sure, the wet track could have been a contributing factor to the defeat of Soaring Ambition at Doomben but experience, always a factor with youngsters, again played a major role at Randwick when twice-raced Fireburn, under slick Schiller handling, scored in the Ranvet over Revolutionary Miss making her debut.

So, why the negativity about Randwick on Saturday? Most of the dwindling band of racecourse regulars found it drab.

Few, if any directors, were sighted, nor the top officials. No, the disco music wasn’t missed. And a bookmaker did operate on Queen Elizabeth’s third floor, the Skyline, after a whine last week. “I’ve never seen so few people here,” a regular ATC member commented.

Once holiday racing at headquarters, particularly around Christmas, had a stimulating vibe but that now switches off after the Villiers. If the ATC can’t do any better than last Saturday why not give the meeting to a provincial venue?

Maybe it was more of a picnic at the highly-appreciated Hanging Rock New Year’s Day extravaganza. The joint was really jumping.

After the sixth event the meeting was abandoned due to kangaroos on the track passing the 1000 metres. According to jockey Jake Duffy, he was “a big-arsed one”, contributing to two of the five starters finishing what was later declared a “no race”.