Pucovski returns to the crease with an eye on Pakistan

Will Pucovski wants to go on the Test tour to Pakistan and revealed selection chair George Bailey reassured him of his place in Australia’s long-term plans after the latest in a string of concussions wrecked his chances of a home Ashes summer.

Pucovski, almost a year to the day since he made an infinitely promising Test debut against India at the SCG but ended the match needing shoulder surgery, will play for Melbourne Cricket Club on Saturday for his first competitive game in 12 months. 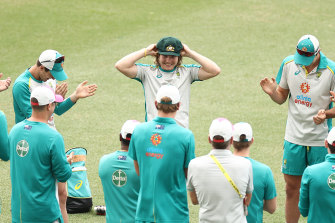 His recovery from the shoulder problem, which still means he is unable to throw and also precluded him from any thoughts of taking part in the Big Bash League, was on course for Ashes considerations when Pucovski suffered a 10th instance of concussion, in training with Victoria.

On the eve of his return, Pucovski was frank about how difficult it was. But he also expressed hope that, should he be back playing for Victoria in time, he will be considered as a member of Australia’s first tour to Pakistan since 1998.

“It probably took five or six weeks before I got back on track,” Pucovski said. “The first couple of weeks were pretty hard, I was trying to go for walks and feeling pretty sick even walking around the block. It wasn’t ideal, and they’re probably the times where you’re really struggling.

“You definitely do have days, especially post-injury, where you’re thinking how much of a nightmare it is and how much it sucks and how bad you feel. But I think that’s just a normal part of life, everyone would go through those days. There’s always been a plan, which always helps me, and as you do start taking those steps towards recovery, those times become less and less, and you get super excited about being back.

“I’d like to say that if I’m playing Shield cricket for Victoria, and I’ve put my name up, I’m ready to go. I think the Pakistan tour is in March, so when I’m playing for Victoria, if I’m doing well and put performances on the board, I can’t see why I wouldn’t be in line to be selected there.”

Pucovski, who at 23 has looked a class above in the Sheffield Shield whenever he has played for Victoria, was disconsolate about the prospect of being passed by others in the queue for spots before he spoke to Bailey in November.

“He just said, ‘Mate, make sure you get yourself right, we want you as a long-term player for Australia, so don’t stress too much about it,’ which was pretty awesome to hear to be honest,” Pucovski said.

“You get pretty worried that with the injury pile-up that people are maybe going to give up on you, but to hear that from him was great. So, as soon as I’m back playing for Victoria, I’m ready to play for Australia if selected.”

Having worked with the renowned mind coach Emma Murray in recent years, Pucovski’s emphasis on consistent routines and a focused approach at the batting crease has helped him accept the random nature of blows to the helmet and possible concussions. He accepts it will be inevitable he is hit again.

“I’m going to get hit again in my career, if you face balls and hopefully a lot of balls, it’s just bound to happen,” he said. “It’s something I’ve got to deal with, but I’ve also got people helping me out with my concussions and I feel pretty confident that regardless of what happens I’ll always be able to bounce back.

“I’m hoping the day comes where I get hit and I can just keep batting. That would be the ideal scenario. But it’s one of those things where I have full faith in the people around me that allow me to physically and mentally get out there and play good cricket.

“I know how much I want it, how much I love it, so I focus on that and worry about things like that when they happen. It will happen again, and I know I can bounce back. No question in my mind I can do that regardless of how many setbacks I get, even though I’m kind of hoping now I get a clear run at it and the setbacks come to an end.”

Over the intervening 12 months, Pucovski has “watched a lot of sport”, resumed university study and also taken up golf. And while watching Australia’s Ashes domination of England has been difficult, it has also provided plenty of incentive to return.

“It can be difficult to watch at times,” he said. “I’ve always had a very big passion for Test cricket, so when other people are doing it you’re excited for them and hoping they do well, it does still suck a little bit that you’re not out there.

“But that’s a good motivator as well where you just go, ‘That’s where I want to be,’ and hopefully, you get there again. I’ve definitely watched a fair bit of it because I’m too much of a fan not to watch it.”