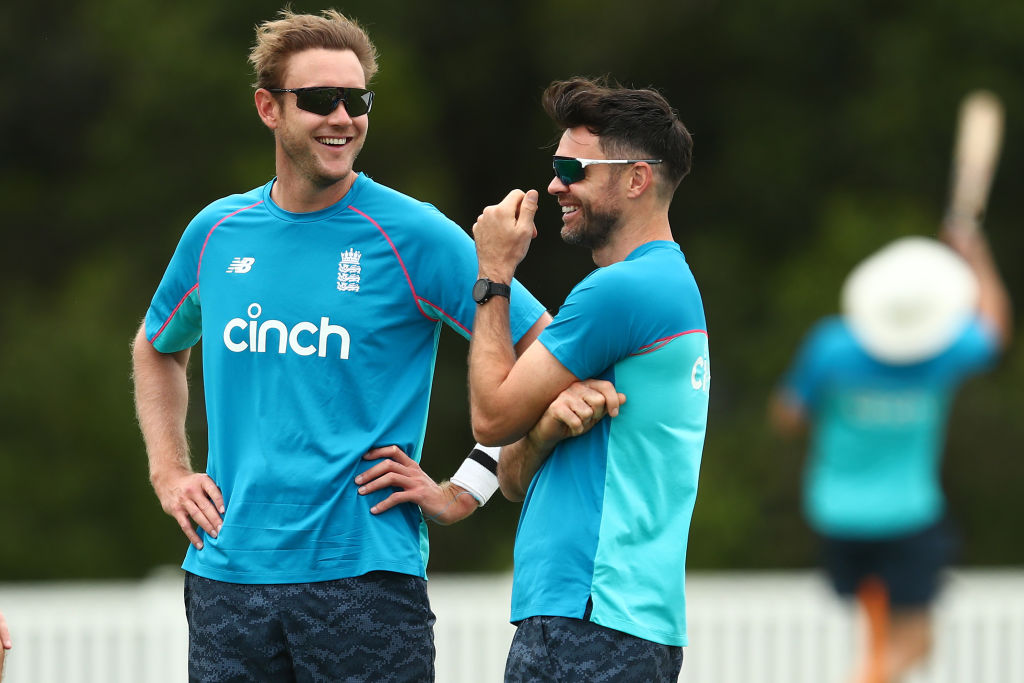 Ricky Ponting said he was ‘staggered’ England had opted to omit both James Anderson and Stuart Broad for their Ashes opener against Australia after the tourists posted a miserable first innings total of just 147.

Eyebrows were raised as Anderson – the all-time leading wicket-taker in Test cricket among fast bowlers – was left out of England’s initial 12-man squad in the build-up to this winter’s curtain-raiser at the Gabba.

And there was yet more surprise as Joe Root confirmed Broad had also failed to make the cut at the start of day one, with the tourists selecting an attack of Ollie Robinson, Chris Woakes, Mark Wood and Jack Leach.

However, the spotlight was firmly on England’s batsmen as Root won the toss and elected to bat and the morning session could hardly have panned out any worse for the visiting side.

Opener Rory Burns was dismissed with the very first ball of the series, captain Root was removed for a duck and Jos Buttler top scored with 39 as England were skittled for 147 by a ruthless Aussie attack.

Heavy rain brought play to a premature end before Australia could begin their response, but the hosts’ emphatic bowling performance leaves England with a mountain to climb in salvaging even a draw.

Ex-Australia skipper Ponting could hardly believe the spectacular nature of England’s collapse on day one, but felt Root had already made a big mistake before the first ball was bowled in Brisbane.

‘We all nearly fell off our stools this morning when we heard that Broad was out as well as Anderson,’ Ponting told cricket.com.au at close of play.

‘They are lucky they have got a really good seam attack because that’s the conditions that they’re brought up in.

‘Maybe the option was to leave the spinner out and keep Broad in – that probably would sit better for me than not having brought Broad or Anderson into the XI.’

Ponting is confident the conditions at the Gabba were tailor-made for veteran duo Anderson and Broad to wreak havoc against Australia.

‘If Anderson and Broad were both in that team with Robinson or with Woakes, there’s three guys that would have just eaten up those conditions,’ Ponting added.

‘They would have been hard work to face there so if they had named those guys in the XI, potentially their decision to bat first might have been different.

‘They might have decided to bowl and give those guys the absolute best conditions that they want.

‘Anderson has got seven wickets in four games at the Gabba so that might be another reason they left him out as well, but today for me just seemed like it was different conditions than he would have ever bowled in before in Brisbane.

‘I’m staggered that both of them aren’t playing, or at least one of them.’

Mitchell Starc’s place in Australia’s Test team has been questioned by some parts of the media in the lead-up to this winter’s Ashes series Down Under.

But Ponting said Starc’s outstanding display with the ball – starting with his stunning opening delivery to dismiss Burns – will have silenced those doubting the pace bowler ahead of the Gabba Test.

‘It probably wasn’t the way that he planned it out, but the thing that I loved about it was that it was fast, it was full and it did swing,’ Ponting went on as he looked back on Burns’ dismissal.

‘Burns made a mistake but well done to Starcy and the Gabba just went berserk.

‘I love what he brings to the table because he’s of the overall package of what he has – tall, left-arm, fast and swings the ball.

‘But if he’s not swinging the ball then I don’t think he is anywhere near as effective. It’s fantastic for Starcy, it’s just what he need at the start of the summer, a little bit of confidence.

‘He’s copped it a bit the last few months from different parts of the media about whether he should be in the side.

‘The few days leading up to this Test match were going to be really important to Mitchell Starc. If he could prove to the coaches and the players and the captain that he is bowling fast and he can swing it, then he is just picked, simple as that.’