Patience the key with Smart Moove in championship qualifier

The four-year-old will jump from barrier 13 in the 14-horse field and that means conceding a start, but Thompson said if the race is run to suit then she is a lot better chance than her price would suggest. 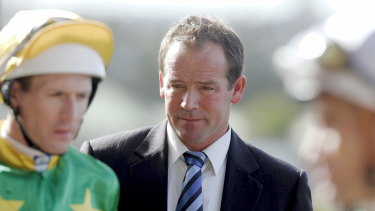 Smart Moove has had two lead-up runs, including a third at Bathurst behind Speed Camera and Tale Of The Kraut, both of which will contest the qualifier, before an eye-catching seventh at Canterbury nine days ago.

"The race at Canterbury the other day we knew was too short for her, but we wanted to see her hitting the line like she did,’’ Thompson said.

“She pulled a front shoe in the run at Canterbury and was dipping. Once she balanced up, she hit the line strongly.’’

At her last attempt at 1400m  at Dubbo in November  with Ashley Morgan in the saddle, she ran out an easy winner after drifting back from a wide alley, which is what she will likely be doing at Mudgee.

Thompson knows plenty about Mudgee, having trained there for a period, but has spent the bulk of his training career at nearby Gulgong.

“She's funny, sometimes she jumps right on the bunny and sometimes, like the other night, she's happy to just relax and go out the back,’’ he said of Smart Moove.

“Luckily, Mudgee is a 400m straight and we have a chance.

“We have to be patient, not go before the corner like a lot of jockeys do at Mudgee. You've got to realise you're on a fair horse and are a chance of picking them up."

Mudgee trainer Gayna Williams, who has trained the second placegetter in the past three central districts heats, has three runners in the qualifier but that could drop to two – Healing Hands and Beeokay – if topweight and early favourite El Mo hasn’t recovered from a foot abscess in time to take his place.