The start of David Warner’s Ashes campaign has twisted on a reprieve from a Ben Stokes no-ball that may not have occurred had the umpires picked up three previous no-balls in the same over.

The second morning of the Gabba Test was less dramatic than the first but still absorbing as Warner and Marnus Labuschagne grafted hard in the face of searching spells from the England seam bowlers before counter-attacking their way to 1-113 at lunch. 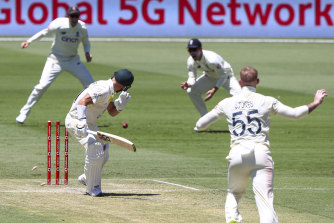 David Warner is bowled by Ben Stokes – but reprieved by a no-ball.Credit:AP

Warner was on 17 and Australia 1-31 when Stokes bowled his first over of the series. Fourth ball he curled an inswinger back from the line of the off stump to squeeze between the opener’s bat and pad. The bails flew and England celebrated, but Stokes seemed to know instinctively that something was amiss.

Replays showed that he had overstepped by a fair margin, mirroring his Test debut in Adelaide in 2013 when Stokes was denied his first wicket, that of Brad Haddin, by another no-ball.

The plot was to thicken in subsequent overs as the Australian free-to-air broadcaster Seven revealed – through some footage analysis from Trent Copeland – that Stokes had in fact bowled a no-ball every previous ball of the over, three in all.

Had Stokes been made aware of these earlier transgressions, he may well have fixed the issue in time for the ball that got through to hit the stumps.

As it was, Warner and Labuschagne settled in, attacked the left-arm spinner Jack Leach, and went to the interval in firm occupation. Stokes, meanwhile, looked tired and sore from his first session in the field.

Ricky Ponting, commentating a few moments after Copeland’s revelation, had very little sympathy for either the on-field umpires Paul Reiffel and Rod Tucker, or the third umpire Paul Wilson.

“If it’s someone upstairs who’s supposed to be checking these, and they haven’t decided that any of these are a no-ball, that’s pathetic officiating as far as I’m concerned,” Ponting said on Seven. “If he’d been called for a no-ball there, of course he’s going to drag his foot back. It’s obvious that the third umpire’s not looking either – they’re only going back and checking when a wicket falls.”

The former umpire Simon Taufel confirmed that the third umpire, with the help of an ICC technician, is meant to be advising the on-field officiators that no-balls were being bowled.