Nowhere to hide: Australia, New Zealand are best of frenemies in World Cup

No secrets and nowhere to hide. That’s the theme of our crucial clash with New Zealand in our final group stage match of the T20 World Cup on Monday.

In the decade or so that I’ve been playing for Australia, it feels like close to half the matches I’ve played have been against the White Ferns. 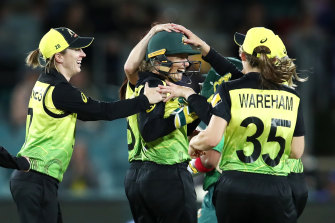 Prior to the ICC Championship, we played New Zealand every season in the Rose Bowl, which has been running since 1985. Since the ICC Championship began, we’ve still played them on a regular basis across formats. There’s a lot of history, a lot of respect and many friendships between the two sides.

Add the fact that several of their players compete in the WBBL and the result is we know the New Zealand way of playing as well as you could perhaps ever know an opposing team.

With that comes advantages and disadvantages. We know them – but they know us just as well.

You can be sure that in the time leading up to Monday’s do-or-die match, plenty of data and knowledge about each side and individual players has been analysed.

For example, Suzie Bates and Sophie Devine – ranked one and two in the world in T20 batting – both played for the Adelaide Strikers in the WBBL last season.

Devine, particularly, had an incredible season and dominated with the bat. It was nice for her, but it gave our bowlers an opportunity beyond international cricket to get a sense of what she’s good at and where her weak points may be. They didn’t just come up against her in the middle of an international fixture. They bowled to her in the nets at training and saw the way she prepared and went about her job.

From experience like that, our players can go into the match with a pretty good sense of what will potentially work against those two talented batters.

And, similarly, how best to deal with the bowling of Amelia Kerr from the Brisbane Heat, or Lea Tahuhu, who’s with the Melbourne Renegades. From that point, the challenge becomes executing those plans as well as possible.

Of course, it works both ways. While we’ve gained a close understanding of how to go about playing the New Zealanders, they’re also able to go into this game with a sense of familiarity about us.

All in all, with so much material and opinion available, the task changes from seeking out everything you can to being able to decipher what’s important and what’s not. Sometimes there’s too much information, too much knowledge floating around and you have to be able to cut through it and focus on what’s going to get you to your goal.

And you also have to consider what’s within your limitations. Instead of trying to absorb everything and cover every base, you have to be realistic about what you’ll be able to actually execute with the group of bowlers and batters you have.

Now, that all might sound a bit like technical sports-speak. But, when there’s so much up for grabs between two sides with a long record of close and hard-fought contests, these are the kind of one-percenters that can make all the difference. A World Cup semi-final is on the line.