No Paine problem: Tassie ready as fallback for Perth Test

Cricket Tasmania’s stinging criticism of Cricket Australia for their treatment of Tim Paine should not count against Hobart hosting an Ashes Test if it cannot be held in Perth, chairman Andrew Gaggin says.

Cricket Tasmania recently issued an angry rebuke of Cricket Australia for their “appalling treatment” of Paine, saying the former captain should have been supported by the national body, not tossed aside. 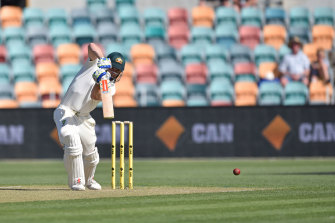 Shaun Marsh in action for Australia at Bellerive Oval in 2015.Credit:Scott Gelston

But with Perth only a 50/50 chance of being able to host the fifth Test due to COVID-19 border and quarantine restrictions, Hobart stands ready to step in to host the Test and Gaggin said the strongly worded statement would not count against Tasmania as the fallback option.

“They are separate issues. We have disagreements from time to time – last year WA had a crack at Cricket Australia over India not playing there.

“These are separate issues, so I don’t think it will come into it. They might have been a bit cranky with us, but that is life in a federation.

“But that is done and dusted now the main thing is now we are looking after his [Paine’s] legacy and hopefully he can play for Tasmania in the second half of the season.”

He said Bellerive Oval was ready and in perfect condition. The curators had found a better balance in the pitch this year after several years of being a green top.

“The pitch is good. The pitch has been created differently this year, it’s always been a bit green,” Gaggin said.

“There’s a definite change this year. We requested more of a four-day pitch than being a bit green and the games this year have had a better balance. The game just finished went down to the last 5-10 overs.

“We have always said we are not trying to pinch the Perth Test, it is the Perth Test and until it is decided it cannot be held there then that is where it will be.

“But if it cannot be in Perth then it should be played in Hobart. We are well-placed, they are opening the borders in two weeks, we will have pretty much full capacity, we have a new scoreboard and another new video screen. It is ready to go tomorrow if they want it.”

WACA CEO Christina Matthews said on Saturday that Perth was only a 50/50 chance to host the Test due to COVID-19 restrictions.

Hobart and Canberra shape as the likely alternatives to host the fifth Test, which is scheduled for five days after the Sydney Test in the new year. It would require exemptions from WA border restrictions to be held in Perth. A second test in either Melbourne or Sydney could also be an option.