In an alternate universe, Annabel Neasham could have been wending her way round the English countryside selling upmarket real estate to well-heeled aristocrats or cashed-up City of London entrepreneurs.

Perhaps she might have been playing piano or trumpet in a rock band or jazz ensemble, violin or French horn in an orchestra or singing in a chorale. 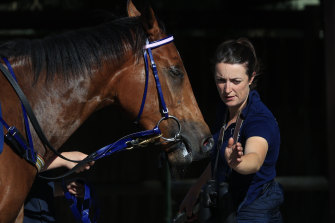 Or she might have opted for a more regal vocation, and forged a career in the bloodstock world, working on the Queen’s stud farm at Sandringham in Norfolk, where Her Majesty’s racehorses are foaled and brought up.

Instead, she will be at Moonee Valley saddling up the hot favourite, Zaaki and stable companion Mo’unga for Australia’s greatest weight-for-age race, the Cox Plate, having made a whirlwind beginning to her training career in Australia.

Neasham is, says someone who knows her well – David Eustace, one half of Victoria’s champion training duo alongside Ciaron Maher – a driven perfectionist with a love of horses who works hard and simply “deserves the success that is coming her way”.

And what success she has had. From almost nowhere – Neasham left the employ of Maher and Eustace, where she ran their Sydney stable – to set up on her own just over a year ago and has already had four group 1 victories through her two stable stars Zaaki and Mo’unga. 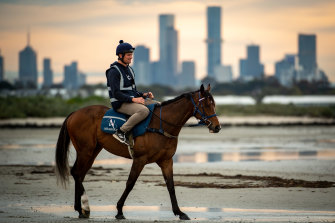 She puts things more modestly when asked how she came to hit the ground running, putting it down to luck, the support of many mentors – particularly Maher and Eustace – and being given a chance by people prepared to spend money on good racing stock and giving them to her to train.

So, who is Annabel Neasham and how did she get to this point? After all, many well-known trainers can go through their careers without having a horse good enough to run in a Cox Plate, never mind win one.

It all started, she explains, when she was growing up in rural Northamptonshire (about 120 kilometres north of London) and, like many of her contemporaries, was just “mad about horses”.

“I was lucky enough to have a pony at home, and it escalated from there. Throughout all my school holidays and weekends it was just horses. All weekend, all the time if I could.”

It wasn’t the sleek blue bloods of the flat who interested her but the tough old warriors of the jumps that won her heart.

“ I grew up in the Kauto Star, Denman and Hurricane Fly era, and I was in my teens when they were running around and winning Cheltenham Gold Cups and Champion Hurdles.

“With the jumpers, they stay in training a lot longer, they become personalities that everybody can associate with. I just fell in love with those sort of horses, jump racing in general and Cheltenham in particular.”

Her talents were not just equestrian, however.

A gifted musician, Neasham won a music scholarship to one of Britain’s more expensive private schools, Uppingham (current fees for boarders are about $26,000 a term) where she reached high standard on the trumpet, violin and piano and also sang in the choir and played the French horn.

Not that a career in music ever loomed.

“The scholarship was a big help to get a reduction in the school fees. As soon as I left school I pretty much gave up. I did pick up the trumpet at Canberra races one day and played it before the jockeys went out which was quite funny.

“It just got drilled into me so much. When you have got a scholarship it is compulsory that you are up and practising at 6am every morning. It squeezes any love out of you, but it was a means to an end, and it saved my parents some money.”

Horses were always front and centre, and it was a similar story when she attended the University of Reading where she studied real estate.

“I had three years there, but I was very much doing the horses in between … I wasn’t at university very often. It wasn’t far from Lambourn [a major training centre] and I used to go and ride out my housemate Tom Ward’s point-to-point horses every day. ”

Ward, who also worked in Australia for John O’Shea when he was Godolphin trainer, is now a trainer in the UK.

Neasham had spells working at the Queen’s Stud in Norfolk – “it’s a pretty magical place” – and then spent time with Ted Voute, one of Britain’s leading bloodstock consignors who also is Prince Faisal’s racing manager.

“I learned a lot from Ted. He gave me a lot of insight in the early part of my career.” 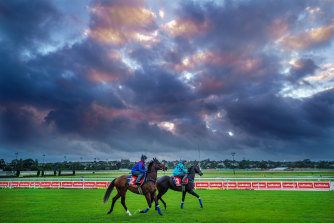 Zaaki and Mo’unga at trackwork at Moonee Valley.Credit:Racing Photos

But Neasham knew she had to follow her instincts.

“I have always loved adrenaline, I don’t know why. I have always been pretty keen to get my heart racing. It was probably why bloodstock was never going to be a career for me long term because I wanted to be part of the action.”

She came to Australia some five years ago on a working visa and got a job with Gai Waterhouse.

“It seems that everyone starts off with Gai – the school of Gai. Everyone has heard of her, she’s the household name of Australian racing and everyone back in England knows her. As an English girl going to Australia you want to go to work with Gai,” she said.

“With my visa I was only on a working holiday visa with Gai, so I was going to have to switch or get sponsored.”

Enter Maher and Eustace, who had met Neasham when she had been sent down to Melbourne with some of Waterhouse’s spring carnival runners. “Ciaron offered to sponsor me and a great role there, so I switched.”

While working for Maher she put an entry on her CV that few can boast of, victory in the Mongol Derby in 2018.

It is the world’s longest horse race, run over 1000 kilometres across 10 days, with riders having to spend more than 13 hours a day in the saddle. She teamed up with Adrian Corby, Maher’s horse breaker, to land the prize – proving not just her commitment to adrenaline-fuelled adventures, but her horse skills.

“I owe nearly everything to Ciaron. He gave me more opportunity than anyone else would have done,” she reflects. “He’s very good at throwing the keys at his staff and letting them have responsibility if he feels they are ready for it. I will always be grateful for the opportunity he offered me.”

That opportunity was to relocate to Sydney and run the stables Maher was establishing at Warwick Farm.

“I had to beg him initially, but he caved in and from there it spiralled. It was just a great job to step into training in my own right.“

She did so last year, and since then, with the support of big clients like Aquis, she has thrived.

Winning the Cox Plate on Saturday would serve to elevate her still further.