Maxwell takes back seat in Stars’ thumping loss to Scorchers

Melbourne Stars superstar Glenn Maxwell will regain the captaincy for Thursday night’s derby with the Renegades after playing under Adam Zampa in Tuesday’s loss to the Perth Scorchers.

Maxwell returned to the Stars’ line-up after overcoming COVID-19 and completing his mandatory isolation period, but did not bowl or captain the side on Tuesday, with coach David Hussey electing to ease his marquee player back into the side. 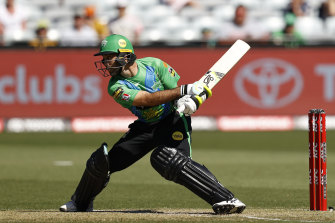 But Zampa, who captained the Stars in Sunday night’s win over the Adelaide Strikers, was unable to lead his side to victory against the ladder-leading Scorchers, who posted an insurmountable 3-196 at GMHBA Stadium in Geelong.

The Stars were 1-2 in reply after two overs and managed just 9-149 in reply, to see the Scorchers retain their place atop the BBL ladder.

The Scorchers – who lost keeper-batsman Cameron Bancroft just before the game after his partner tested positive to COVID-19 on Tuesday morning – were ruthless with the bat.

There was a controversial moment at the halfway point of the Scorchers’ innings that wasn’t picked up by commentators until a few overs later, when Evans retained the strike for the 11th over despite the fact he should have been at the non-striker’s end.

He blasted the first ball of the 11th over for six after the Stars elected to activate their x-factor player and bring all-rounder Clint Hinchliffe into the side for quick bowler Brody Couch.

Scorchers coach Adam Voges described the mix-up as an innocent mistake and said he had seen scenarios were that had gone the opposite way and the player who wasn’t meant to be on strike had got themselves out.

It had little bearing on the outcome, however, with Perth – who were also without Mitch Marsh, Josh Inglis and Colin Munro – showing their class with both bat and ball. 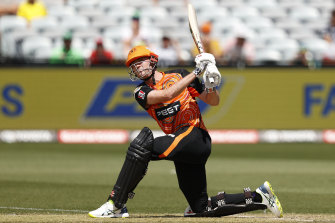 Scorchers captain Ashton Turner was terrific with the bat for his side against the Stars.Credit:Getty Images

The Stars’ top order batsmen tried to build a partnership via Beau Webster and Joe Burns (20 off 17), before Burns fell to Matthew Kelly, bringing Maxwell to the crease at 2-59 in the ninth over. But Maxwell was out an over later, caught for five, leaving the Stars in all sorts of trouble at 3-68.

Webster continued to hit boundaries to keep some life in the run chase, but he just couldn’t get any support at the other end, and when he departed for 63 off 47 in the 15th over, his side still needed 76 to win.

Kelly was the pick of the Scorchers’ bowlers with 4-25 off his four overs, but it was Evans’ knock of 69 off 46 that saw him collect player of the match honours.

While the loss left the Stars in seventh position, they have four matches remaining against the sides sitting sixth, eighth, fifth and fourth, still leaving their destiny in their own hands.