Glenn Maxwell has staked an early claim for catch of the international season in Australia after a spectacular effort to get rid of New Zealand opener Martin Guptill in Cairns on Tuesday.

Diving full length to his left, Maxwell was horizontal when he grabbed the one-handed chance off Mitchell Starc, as the Kiwis battled to 9-232 from their 50 overs at Cazaly Stadium in the first of three one-day matches over the next week.

It began a good day in the field for Maxwell, who was Australia’s leading wicket-taker with 4-52 from his full quota of 10 overs.

The dangerous but inconsistent Guptill made six from 19 balls, and those runs came off the first two deliveries of the match, as New Zealand proceeded with caution on a holding Cairns pitch offering some seam movement.

The Kiwis had hit just 10 runs off 4.4 overs when Guptill went, and his captain Kane Williamson continued the slow pace with Devon Conway.

New Zealand were 1-29 from their first 10 overs, with Josh Hazlewood conceding only seven from his opening four-over spell, to eventually finish with 3-31. 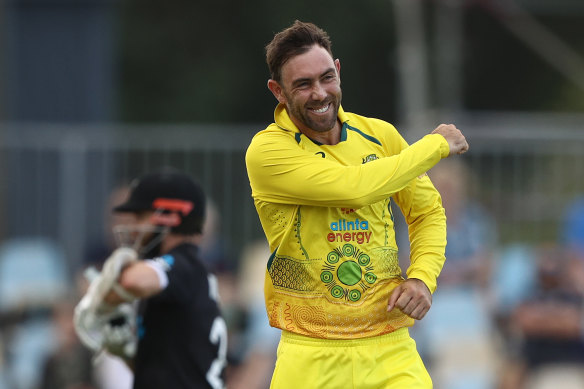 Glenn Maxwell of Australia celebrates the wicket of Kane Williamson.Credit:Getty

Conway and Williamson added 81 in 18.1 overs with occasional bursts of hitting, but each perished attempting to lift the modest run rate against accurate Australian bowling.

Conway went lbw attempting to sweep Adam Zampa for 46 from 68 balls. Zampa finished with a tidy 1-38 from his 10 overs.

Williamson (45 from 71) lost control of a leg-side hoick to Maxwell, giving the off-spinner his first wicket of the day, comfortably caught in the deep by David Warner.

And so the pattern went. Daryl Mitchell got to 26 from 33 balls before chipping a simple catch straight Steve Smith at midwicket off Maxwell, and in the same over Tom Latham (43 from 57) dragged a catch to Zampa at short fine leg.

Uncertain how the early season pitch would play after heavy rain late last week, captain Aaron Finch had no hesitation in bowling first, something the captains did through all three matches during the one-day series against Zimbabwe in Townsville last week.

The teams batting second won each game, with Australia claiming the series before Zimbabwe won their first match on Australian soil.

Off the back of being bowled out for just 141 by cricket’s perpetual minnows, Australia strengthened their batting on Tuesday by recalling Marnus Labuschagne in place of spinner Ashton Agar.