Poonam Yadav has a wonderful smile and wicked wrong-un but the superstar Indian leg-spinner would have been lost to cricket had her family not moved home when she was young.

The woman who destroyed Australia's batting line-up in the Twenty20 World Cup opener in Sydney, and hopes to reprise that in the final at the MCG on Sunday, says she would have been "married off" and unable to pursue her love of one the sport's more enchanting crafts had not her family given her the opportunity to do so. 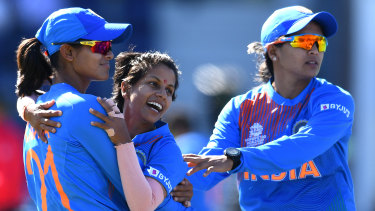 Poonam Yadav is mobbed by teammates after snaring a wicket against Sri Lanka.Credit:Getty Images

"When I started off, people doubted my skills and would ask: 'Why are you getting into playing and stuff?'. My family is from a small village," she said.

"We shifted to Agra (in northern India) because my dad was in the army, and that’s why I could play cricket. Had we been in our village, I would have been married off by now. I credit my father for who I am now. He has struggled a lot for me and my siblings.

"My mother, too, was asked about me returning home late and leaving home at dawn. When I thought of all this, I resolved to do something significant. Some of the things people said used to pinch me back then but I took things positively and moved on."

Standing at just under five feet, the diminutive wrist-spinner – she is India's leading wicket-taker in T20 internationals and the joint leading wicket-taker of this tournament – had initially been a medium pacer. She swapped to leg-spin and, until four years ago, has also mixed this with off-spin. 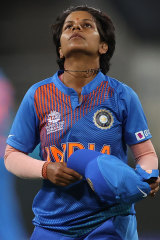 In an interview with India's Economic Times, Poonam, 28, said she had been warned by her coach that "leg-spin is difficult and you need a lot of courage to learn it" but the thrill of the challenge prompted her to give it a go.

"I said: 'I’ll take the risk'. I used to be the only one at Ekalavya stadium (in Agra) bowling leg-spin. Even when I used to go for trials, there were separate groups for off-spinners, left-arm spinners, medium-pacers. I used to ask them: 'Where are the leg-spinners?'," she said.

"I was told I was the only one then. Now there are a lot of leg-spinners in Agra, even girls."

Poonam's World Cup hopes had been in doubt when she was hurt at a team training camp in December and missed the tri-series against Australia and England. However, this may have had an inadvertent benefit. It meant the Australians were unable to have vital practice against her, while it also gave Poonam more time to work on her overall health.

"I did not know myself it (injury) would turn out to be this bad. After the injury, I focused on the diet and on fitness,” she said.

Poonam was crunched for six in her opening over against Australia by Alyssa Healy in Sydney but responded by having her opponent caught and bowled next ball. She continued to pose questions because her deliveries are at a slower pace and have more loop than what the defending champions are used to. This had put greater focus on the Australians' footwork, and they largely failed the test.

Australian skipper Meg Lanning, who fell for five in the tournament opener but not to Poonam, said the leggie would be a major threat on Sunday.

"We played an IPL game a couple of years back. She is really exciting character and she just loves cricket and she has become an excellent bowler, a world-class bowler, and gets a lot of good batters out. She is doing a lot right so she is certainly someone we will be looking at," she said.

The Australians have pointed to the success they subsequently had against Sri Lanka and Bangladesh but Poonam is of a higher quality and quick learner. She said before the tournament she needed to bowl with greater flight to the Australians, as she had done in a Twenty20 series in 2016, when she said her opponents could not "pick her".

The Australians have worked assiduously in the nets since Sydney on dealing with this greater loop but Poonam may yet unveil something new.

"I am consistently working on something or the other. Earlier, my 'googlies' used to be a bit slow in pace. Now I can bowl it quicker," she said.

"I have a couple of types of run-ups even while bowling leg-spin. I keep changing things because that will surprise the batter as well."