England captain Heather Knight has expressed deep frustration at her side’s semi-final exit from the T20 World Cup due to wet weather and the fact no back-up day was put in the calendar.

The first semi-final on Thursday at the SCG, set to get underway at 3pm between England and India, was washed out without a ball being bowled. 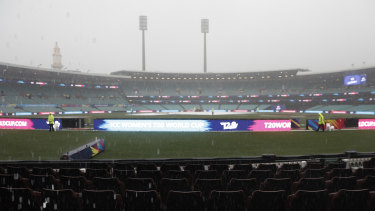 Rain falls over the SCG on Thursday. Credit:Getty

Heavy rain meant the covers remained on in the middle and by 4.08pm umpires abandoned the match knowing a toss by the cut-off time of 4.36pm was not going to be possible.

The no-result means India advance to Sunday’s final at the MCG because they finished top of their pool after four matches.

England will rue their opening loss to South Africa and had come to the realisation when they arrived at the ground they were a slim chance of advancing to what would have been a fifth Women’s T20 World Cup final.

“We're gutted,” Knight said. “There's not a lot we can do about it. It's going to be a bitter pill to swallow for a few of us now.

“There was no chance of us getting out there today. Obviously the weather has cost us. We're just gutted that we didn't have a chance to fight for a place in that final.”

All nations signed off on playing conditions that stated there would be no back-up day for the semi-finals in the event of bad weather.

It became apparent in the lead-up to Thursday that a problem could arise and Knight hoped that administrators would think more carefully in future so a repeat did not occur.

“They're the rules that everyone signed up to,” Knight said. “You'd hope now there is going to be a rule change and moving forward no other team will have to experience going out of a World Cup purely because of rain. Hopefully it changes. We're frustrated it has come to this.”

The England skipper also joked that perhaps stereotypically poor UK weather may not be as bad as it is made out to be.

“It'll be nice not to have the jokes about English weather now … so that's one positive to take from the day,” Knight said.

India captain Harmanpreet Kaur said: “From day one in this tournament we knew we had to win all the games. It was very unfortunate we didn’t get a game today. It’s a bittersweet thing. We were hoping we would get a game and we were keen.”