Save articles for later

Add articles to your saved list and come back to them any time.

Sean Abbott is on the cusp of a call-up to his first Test squad after crunching a maiden first-class century but an angry Mitchell Starc could not conceal his frustration after being denied the chance for the same milestone.

Just two days before selectors name what has been flagged as a 17-man squad for the series against India, Abbott did his chances no harm with a stunning hundred that has put the Blues in a strong position for a remarkable victory. 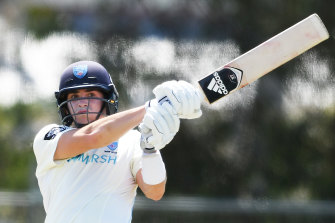 But the pain continued for incumbent Test opener Joe Burns, who made just 11 – taking his season tally to 57 runs from five innings.

Arguably the form player of the competition, Abbott made an unbeaten 102, taking his average with the bat this season to 130.5 to go with 14 wickets at 14. Moises Henriques's 113 is his second Shield century of the campaign.

Abbott can enhance his claims by bowling the Blues to victory against Tasmania on Wednesday after they were skittled for 64 on the first day.

He and Starc shared an undefeated 189-run stand for the seventh wicket to swing the match firmly in the Blues' favour.

The case to blood Will Pucovski under lights in Adelaide next month gained traction on Tuesday when Burns failed again.

After starting the season with back-to-back tons, Pucovski is breathing down Burns's neck.

Selectors Justin Langer and Trevor Hohns recently said the Test squad was settled but Burns's lean run must be a concern.

With the Shield going into hiatus after the current round of games finishing Wednesday, Burns and Pucovski do not have any top level cricket until the first of Australia A's two games against India A. 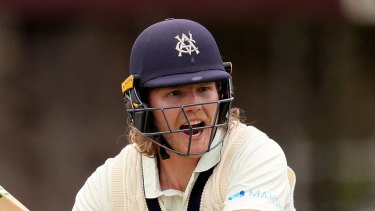 Hohns has flagged that Test players not involved in the limited-overs internationals may be picked in the first 'A' game at Drummoyne Oval.

A source familiar with the issue said Burns and Pucovski, along with other Test squad members, will be given a rest, with a decision on whether they would play grade cricket not to be made before next week.

Test squad members not involved in the white-ball series against India and the A squad will report for duty in Sydney on December 2 or 3.

Usman Khawaja followed his first-innings hundred with an unbeaten 46 for Queensland, who are in a dominant position against South Australia.

It has been a timely return to form for Khawaja, whom Hohns said was still on the selectors' radar at the age of 33.

Victoria's clash with Western Australia appears headed for a draw after Josh Inglis's 125 off 122 balls gave the Warriors a first-innings lead on day three.