Henderson watched his six-year-old stretch seven lengths clear of the talented Monmiral in the hands of Aidan Coleman, earning quotes of 2-1 for the Arkle Novices’ Chase at Cheltenham in March, a race won by Jonbon’s brother Douvan in 2016.

The master of Seven Barrows said: ‘This was always going to be his game, but he was a very high-class novice hurdler last season. It’s what we hoped for but it’s just a huge relief now it’s over. 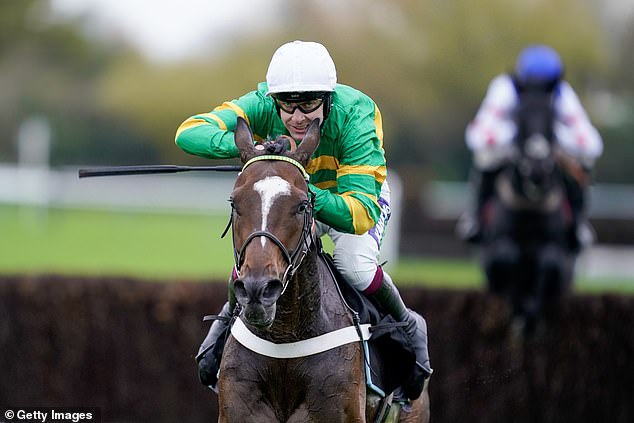 ‘He jumps and he gallops and it’s a great racecourse and beautiful ground, so it was a good test for him. This isn’t a racecourse to take lightly but he was pretty flawless there.

‘We’ve got two and a half weeks now and it just gives us a bit of time before Sandown (Henry VIII Chase). So this has served its purpose — it’s a beginning and he’s exciting.’

With the ground easing at Ascot this week following almost an inch of rain, Henderson also allayed fears that Constitution Hill would miss his comeback in Saturday’s Coral Hurdle. He said: ‘It (the ground) is fine. I didn’t even have a sleepless night — the night before was hell! He’s all ready to go.’