Australian racing has changed a lot since David Hayes last packed up and went to Hong Kong in 1996, but there has been one constant over the past 25 years – Lindsay Park has remained a local powerhouse.

While Hayes says he's no good at predicting the future, he hopes his business, which will continue under the management of son Ben Hayes and nephew Tom Dabernig, is still at the peak of his powers when he one day returns home from his upcoming venture to Hong Kong. 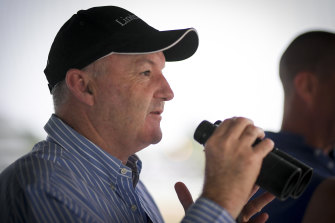 On Saturday, the trio will saddle four runners in the Australian Cup, a race with which the Hayes family name has been synonymous.

Hayes' father Colin won Lindsay Park's first Australian Cup with Bush Win in 1974, and since then, the stable has amassed another eight, leaving them gunning for a 10th this weekend.

"We've had a good run in the race, even when Dulcify ran down Manikato in my dad's era," Hayes said.

"The Blue Diamond is a bit like that as well. I wish the Melbourne Cup was, but it was like that for Bart. It's funny how stables have their races they go well in."

Harlem is chasing history, having won the past two editions of the race, while Fifty Stars is searching for a maiden group 1 win just seven days after winning the Blamey.

But while a win in Saturday's $1.5 million will be welcomed by Hayes, the 57-year-old is focused on 2021, making sure he leaves Lindsay Park with a stable of good horses before he departs for Hong Kong.

"It would be a bonus [winning this Saturday], but as a team, we're more about next season," he said.

"What happens now, we're not pushing too hard for my sake, we're saving for next year. 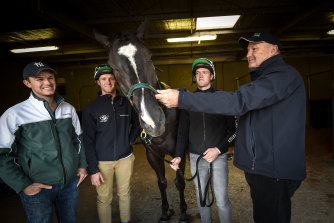 "There are a lot of horses that have been saved up."

Hayes will hand in his licence in a few months' time and start training out of Hong Kong on July 20, returning to an old stomping ground where he collected two trainers premierships between 1996 and 2005.

When he last left Australia, he took with him four children under five, leaving behind his Angaston operation which had been a dominant force in both South Australia and Victoria.

"If you ask me, my time as a South Australian trainer travelling, I got sick of travelling. I much prefer my life based in Melbourne," he said.

"Coming back from Hong Kong, we changed our model and set up in Victoria and I'm really happy.

"I did it really for the family. I just thought for their future Victoria was the place I wanted to make the home of Lindsay Park because I think it's the racing capital of Australia and my children would love Victoria."

Under the new set-up, Ben will run the Flemington stable and Dabernig will run the Euroa base, but the racing environment that faces them has differed greatly since Hayes made the trip north nearly 25 years ago.

"When I left last time, there was barely Sunday racing, no night racing," he said. 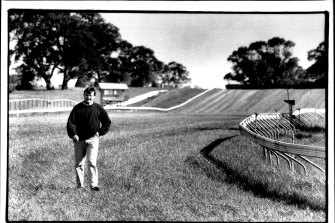 "Mobile phones were only in your car and we used to use a fax. It's a lot different now.

"They didn't have the mega syndicates like we do now, which is a necessity. That's the thing about Hong Kong, every horse is owned by one person. It was more like that in the old days [in Australia].

"[Yearlings were] much cheaper; so were houses. I think they've gone together. But things change for a reason and racing in Australia is the envy of a lot of countries. It's just I'm going to one that I think is the envy of Australia.

"One of the things I'm looking forward to is I'll be able to stay in touch and follow it closely from abroad with wifi. I couldn't do it last time, telephone only.

"I'm not good at predicting [the future, but] I hope it will be that Lindsay Park is one of the leaders."

Hayes said he was looking forward to the new challenge.

"My family is so invested, my children and my nephew, in wanting to be trainers so that made the decision easy because they all put their hand up and were ready to step up," he said.

"I'm pretty excited to go up there. I chose to go up there and I'm not treating it as I'm leaving because I've got my son and nephew training here in a business that I own. It's very important to me that they tick along nicely next year. My focus is on next year, not this year.

"When I went last time, I was going there to earn money to buy my family out and I went with four [children] under five and I was 32. This year I'm freehold, I've achieved my goals and I'm looking forward to training overseas and making a bit of room for the boys here."