Rawalpindi: Virus-hit England stamped their aggressive brand of Test cricket on their first match in Pakistan in 17 years by amassing a world record 4-506 with four batters smashing hundreds on Thursday.

Zak Crawley hit 122 and Ben Duckett made 107 in a blistering opening stand of 233. Ollie Pope and Harry Brook blazed hundreds in the last session in an astonishing display of power-hitting against an inexperienced Pakistan bowling attack.

And the Test almost didn’t start.

England confirmed it had a fit 11 and the match could go ahead only two hours before the toss. Then it destroyed a host of records in only 75 overs when play ended prematurely because of bad light.

The 4-506 total was the highest on the first day of any Test, surpassing Australia’s 6-494 in 1910 against South Africa in Sydney. England also became the fastest team to score 500 runs. Four England batters scored centuries in one innings for the first time in 15 years.

“It’s unbelievable,” Crawley said. “I was pleased with how I played … I was annoyed when I got out because you always want more.” 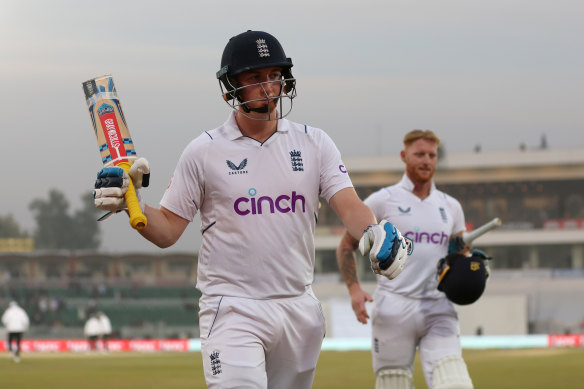 Century-maker Harry Brook salutes the crowd as he leaves the field at stumps on day one against Pakistan.Credit:Getty Images

Of the four centurions, Duckett was the slowest. He need 105 balls for his maiden ton. Brook took 80 balls, the third fastest by an Englishman.

Captain Ben Stokes, who won the toss and elected to bat after recovering in time from the viral bug, was not out on 34 off 15 balls. England batters smashed 73 boundaries and three sixes in a white-ball fireworks display with the red ball.

“It was exciting from England’s point of view,” Pakistan coach Saqlain Mushtaq said. “The pitch was similar to the one we had against Australia, but it should have been a bit supportive.”

The coach was referring to the drawn Test at the same Pindi Cricket Stadium in March, when only 14 wickets fell in five days and the pitch was rated as “below average” by ICC match referee Ranjan Madugalle.

But none of the bowlers could extract any help from a slow, grassless pitch. A maiden wasn’t bowled until the 39th over. 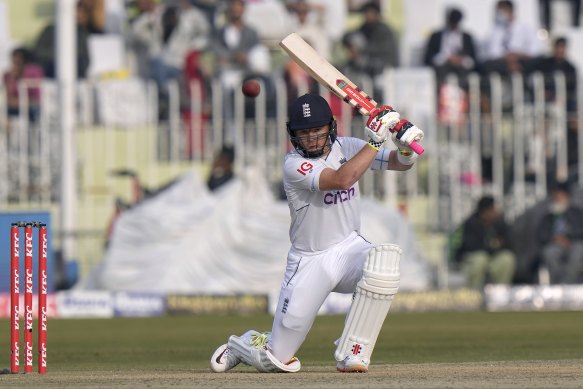 Ollie Pope in action as England’s batters were in a destructive mood.Credit:AP

Crawley and Duckett plundered the first over for 14 runs and had 100 together in the 14th over. They combined for 233 at better than a run a ball before Pakistan picked up three wickets in the middle session when Mahmood and Rauf struck in successive overs with the old ball.

Mahmood broke the stand when Duckett went for a reverse sweep against the leg-spinner and Pakistan successfully went for a TV referral against on-field umpire Joel Wilson’s not out decision.

Rauf then swung in late and clattered Crawley’s stumps in the next over. But England’s intent to score at pace didn’t subside after the dismissal of the two century-makers.

Root was out lbw for 23 when he was struck on the back leg while attempting a sweep.

Crawley was on 99 when Naseem Shah trapped him on the back foot, but Crawley successfully overturned the decision as video suggested the ball would have missed the leg stump.

Two balls later, Crawley achieved the fastest test century by an England opener off 86 balls with a cover-driven boundary, and Duckett reached his maiden hundred by pulling Rauf to the leg side for four. “Pretty special day,” Duckett said.

Pope lashed 14 boundaries. Brook struck six boundaries in one over by debutant part-time spinner Saud Shakeel in the final session.

Crawley and Duckett stormed England to 0-174 in the first session. 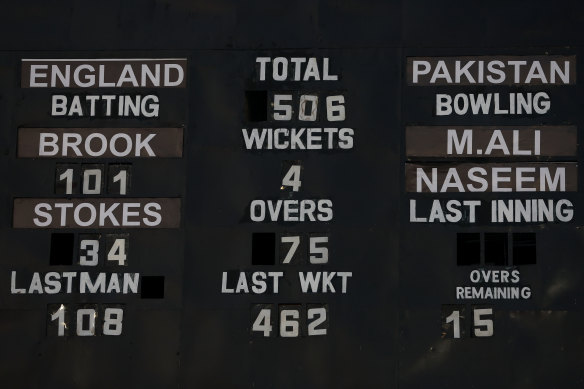 The scoreboard displays the final score at stumps on day one of the first Test Match between Pakistan and England.Credit:Getty Images

Crawley missed an opportunity to become the first Englishman to smash a century before lunch in a test match when he reached 91, while Duckett dominated Mahmood’s spin to make 77. Crawley was ruthless against Rauf’s short-pitched deliveries and the gentle medium pace of Ali, too, to raise his half-century off only 38 balls with 11 fours. He hit another six boundaries in the session and a team-best 21 over his innings.

Duckett dominated the leg spin of Mahmood with his trademark sweep shots and didn’t hesitate to attack the spinner early with a reverse-swept boundary. He completed his maiden Test half-century off 50 balls.

The start of the Test was confirmed at only 7.30am local time after the Pakistan Cricket Board said England “informed [them] they are in a position to field an XI, and, as such, the first Test will commence as per schedule today”.

England had to make a change in their playing XI at the last minute. Foakes was replaced by Will Jacks, who will make his test debut, and Pope will keep. Liam Livingstone will also debut.