Former apprentice jockey Leticia Griffin has stared cancer in the face and beaten it.

And on Wednesday, the 25-year-old will cap her stellar recovery by living out a lifelong dream to clerk the course at Flemington – just the third female ever to do so – with a horse who helped her overcome the disease. 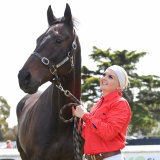 Griffin was just 23 when she was diagnosed with stage three melanoma, in July 2018, after she discovered a lump the size of a golf ball in her underarm, shaking up her life in unimaginable ways.

"At the start I didn't know what hope I had to be honest.

"There was no primary for me, it was all secondary and I had a lump about the size of a golf ball in my underarm. We looked into that and a biopsy showed it was melanoma and stage three. Stage four is basically incurable so it was pretty intense.

"I wasn't confident [I would survive] but I came across like I was, I think."

Turning all her energy into beating the beast, Griffin – who has worked with the likes of Michelle Payne and Dan O'Sullivan – was forced to part ways with her horses and focus on her own health.

But it was in November 2018 in the midst of treatment when retired picnic champion Freshwater Reset came into her life.

"He wasn't educated at all, he'd come off the track and was sitting in a paddock and they couldn't find a home for him," Griffin recalled.

"I got him through word-of-mouth through a trainer I rode for, Wendy Potter. Her daughter, Kate, is a re-trainer and she actually gifted him to me being in the circumstance I was in.

"It couldn't have come at a better time, we've just gone through so much together already and he kept me getting out of bed every day during the hard times basically.

The 11-year-old gelding Jack, who he's now named, and Griffin have built an inseparable partnership clerking country tracks across Victoria including Ballarat, Geelong, Kyneton and Werribee over the past 12 months.

But the opportunity to do the job at headquarters on Wednesday will make Griffin just the third female to ever do so, after Remi Gray and Janet Williams.

"[Racing Victoria] just rang me to say that we're going to send you to Flemington to get to know the bigger track and meet some new people," she said.

"From being a kid, this was something I wanted to do. I didn't picture it being in my 20s, that's all.

"At this point I just want to continue doing this until I'm ready to come back race riding but as far as health I'm really good. I'm just enjoying it for a bit doing this, but in the future I'll come back and do race riding again."

Griffin also thoroughly enjoys retraining ex-racehorses, five of which she's found new careers for in the past 12 months.

"The re-training, I'm really passionate about finding the off the track thoroughbreds forever homes and seeing them doing great things off the track, so that's definitely going to be a big part of my future," she said.

"But whether it's being a clerk of the course or a jockey, I'm always going to be around [in racing]."