‘Fat shaming’ and drinking: Inside England’s Ashes tour from hell

This was the theory: “We want to travel to Australia fitter, faster, leaner, more ready than ever before,” said England head coach Chris Silverwood last year.

This, according to one player, was the reality: “Everyone has got a story about how shambolic it has been”.

From the moment England’s players set off for Australia on November 4, everything that could go wrong did go wrong, although the disaster was set in motion well before even then. 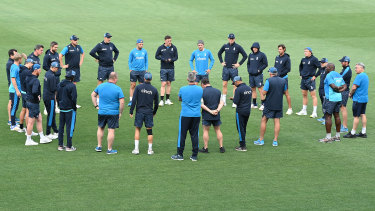 Preparation had already been hampered by the group being split in two between those who went to the United Arab Emirates for the World Cup, and those who flew directly to Australia. They were separated for two weeks while those from the UAE did their quarantine on the Gold Coast, further hampering communication and planning.

The bubble made everything harder when it came to organising nets and matches for those in Queensland. England’s only warm-up game descended into farce at the Ian Healy Oval, which lacked the facilities for international sport. What was supposed to be a first-class fixture became middle practice with players batting three or even four times. No sensible judgments could be drawn, but on the back of this game – rain washed out any other chance of serious outdoor practice – England picked Ollie Pope ahead of Jonny Bairstow for the first Test.

Even once the series had started, the spectre of COVID hung over the tour, and players finally revolted when they were forced to undergo a much more invasive testing procedure in Sydney. This involved a swab going up the nose and down the back of the throat in one go and is not very pleasant. Some players refused to do it, others did it but said they would not let their partners and young children go through the same procedure. It led to the biggest row between players and management of the tour and was resolved only by the resumption of normal PCR testing for those who refused. 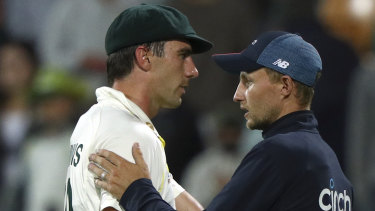 Pat Cummins and Joe Root shake hands at the conclusion of the fifth Test in Hobart.Credit:AP Photo

When the issue of England’s awful selections for the first two Tests was put to Silverwood, he said the series was “a marathon, not a sprint”.

He was wrong. An Ashes tour is like an 800-metre race: you sprint and hope you can hang on. England mistakenly thought they could copy India’s success in 2021 and make it a squad game. They left out James Anderson and Stuart Broad in Brisbane on fitness grounds. While Anderson was understandable, Broad was ready to play on a green pitch that looked more like Trent Bridge than the Gabba.

Unleashing him against David Warner, his “bunny” from 2019, seemed a no-brainer, and yet England picked Jack Leach. Only Mark Wood, briefly, went round the wicket to Warner on the first morning. As soon as Broad did so in Melbourne and Sydney – when it was too late – Warner’s threat declined.

Had England bowled first and thrown their own bowlers at an equally undercooked Australia they may have gained an early foothold. Instead, Joe Root – who regularly pokes fun at Nasser Hussain for bowling first in Brisbane in 2002 – wanted to send a message by batting first. And so, batsmen who had mainly netted indoors, were bowled out for 147. There was no way back.

The bad calls did not end there – chief among them being England’s handling of Wood. The Durham bowler became the tourists’ prized asset, their only genuine pace option, and yet he ended up bowling more overs when the series was dead than when it was alive.

England had stacked their chips on the pink ball Test in Adelaide because Anderson had taken 5-43 there in 2017. But having relentlessly extolled the virtues of pace for the past four years, they picked the same three seamers – Broad, Anderson and Chris Woakes – who had lost at the same venue in 2017 by 120 runs. They were worse this time.

Leach was not picked because England had been spooked by how he was mauled in Brisbane. They ended up using two part-timers, with Ollie Robinson bowling off-spin, while Nathan Lyon took five wickets for Australia.

Even selection away from the Test team was in chaos. On the first day of the Gabba Test, the England Lions were due to play Australia A. England could have used it to give time in the middle to Bairstow, Dan Lawrence, and Zak Crawley. Instead Mo Bobat, the performance director, picked the team 48 hours before the game. England only realised their error when they saw that Australia A included Test squad players Usman Khawaja, Michael Neser, and Scott Boland. All would later play in the series and make an impression.

Selection was made mainly by the coach and captain, but also chief scout James Taylor, with Bobat contributing. Players were frustrated that Taylor, who was not even in Australia, could have so much influence from thousands of miles away.

As Silverwood reflected on the tour, he wondered if he had been too soft on the players. Certainly the cosiness of the set-up has been a major talking point. One player refused to take part in the skin fold test – a gauge of body fat – and, when pressed, accused England of trying to “fat shame” him. The test was never carried out.

Fitness levels clearly dipped for some players as the tour went on. Robinson’s conditioning was an issue from the first Test – when he spent time off the field – but became a recurring theme in every game. 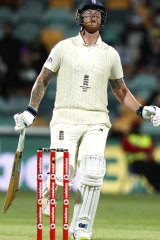 Ben Stokes grimaces after his dismissal in Hobart.Credit:AP Photo

When England had the chance for a day off in Hobart, Robinson played golf, even though he was troubled by a shoulder problem, with Craig Overton preparing to play in his place. Robinson declared himself fit on the morning of the match, but then went down with a back spasm. England needed to be tougher and the medics to overrule him, but Silverwood and Root needed a win and Robinson is a good bowler.

There were also concerns over a drinking culture and whether restrictions were loosened too much in the weeks leading up to the series, and before the COVID bubble was tightened when families arrived. Seeking solace in the glass is not unusual on Ashes tours, and even more so in bubbles, which have a two-fold effect. The players have drinks laid on in the hotels, which are at least away from camera phones and the public, but on the rare days they are allowed out, they are more likely to go wild.

The midnight curfew introduced by Sir Andrew Strauss will certainly return when COVID bubbles go, the players failing to convince the management they can be fully trusted.

Silverwood’s management style was also an issue. He finds press conferences and broadcast interviews uncomfortable and struggles to express himself, which begs the question of how he handles team meetings and speaks to players. 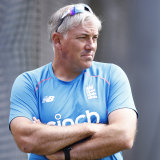 Some senior players felt left out of discussions over tactics and another was angered to learn he had been dropped after reading it in the press. Another felt he had not been given enough time to prepare for a Test, learning only 48 hours before that he would be playing.

There are mitigating circumstances: Insiders felt it was just because Silverwood had too much on his plate and struggled to delegate to his staff, a situation not helped by him contracting COVID.

Also, minimal communication can be interpreted as strong leadership when the team are winning, but with this particular group – few of whom are natural leaders – more interaction was needed.

Dropping 17 catches and taking three wickets with no balls added up to an entire Test match of missed chances, mistakes which were down to discipline. England bowlers, particularly Robinson, constantly overstep when bowling in the nets, and it cost him the wicket of Marnus Labuschagne in Adelaide.

The decision to use Ben Stokes as an enforcer was a gamble which backfired when he suffered a serious side strain in Sydney. The tactics for Leach also caused bemusement. Before the Brisbane Test it was agreed England would be defensive when Leach came on for the first time, knowing Australia would be scenting blood. Players were incredulous when Root brought the field in and attacked, with Leach being taken apart by Australia’s top order. It took him weeks to get over and affected selection for Adelaide.

Issues also came with players not taking enough responsibility. Before Brisbane, Rory Burns was asked if he had thought about facing the first ball of the series. “Nah, not really,” he replied. He was bowled around his legs by Mitchell Starc.

Ultimately, Burns lost his place, not just because of his form, but due to his failure to speak more regularly in meetings. And when communication was clear, it still backfired.

After the Adelaide Test, Silverwood made the batsmen watch footage of their dismissals, but the exchanges became heated as batsmen and bowlers lined up against each other.

In the same meeting, Jos Buttler told players they had to be patient; he was out in the next Test hitting to deep square leg on the stroke of tea. It summed up his tour.

“One team meeting was never going to change anything,” said one player present.