Graham Thorpe is on the brink of the sack as England assistant coach after it emerged that he had filmed police breaking up a team drinking session hours after the end of the final Ashes Test.

The England and Wales Cricket Board has launched an investigation after the all-night party, which involved players from both teams and was ended by Tasmanian police shortly after 6am on Monday.

It is understood that Thorpe filmed the incident and sent it to friends. It was then circulated more widely and ended up in the hands of the Australian media.

In the footage, four police officers can be seen arriving at the party to confront players including captain Joe Root, bowler James Anderson and Australian players Alex Carey, Travis Head and Nathan Lyon.

Police, accompanied by hotel staff, ask the partying players to quieten down and stop drinking. “Too loud,” a female police officer is heard telling the group. “You have obviously been asked to pack up, so we’ve been asked to come.”

Thorpe, speaking from behind the camera, is heard to say: “This is for the lawyers.” He also goes on to name every player present. 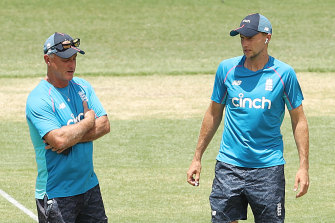 A noise complaint, as the group played music from the balcony on the fourth floor of the building, was made to the team hotel, the Crowne Plaza Hobart, where both sides were staying for the fifth Test.

The players and management had stayed at the ground in Hobart until 2.30am because the fifth Test ended late, and they had media duties to perform as well as kit bags to sort out. They started drinking in the dressing room and while some went to bed when they returned to the hotel, others went to the Australia team room, which had a balcony, and carried on.

The ECB is understood to be more angry that the incident was filmed and then entered the public domain than that players were drinking. No COVID-19 regulations are believed to have been breached.

Thorpe and other coaches were already under pressure after the team’s performance in the Ashes series and this has only exacerbated fears of a drinking culture within a squad who were one wicket away from a whitewash and had been bowled out in just 38.5 overs only hours before.

“During the early hours of Monday morning, members of the England and Australia men’s teams shared a drink in the team areas of the hotel in Hobart,” the ECB said in a statement.

“The hotel management received a noise complaint by a hotel guest, and, as is commonplace in Australia, the local police attended the scene. When asked to leave by hotel management and the Tasmanian police, the players and management in question left and returned to their respective hotel rooms.

“The England party have apologised for any inconvenience caused. The ECB will investigate further. Until such time, we will make no further comment.”

With two days to spare before England’s players return home, most of the squad have remained in Hobart until their scheduled flight today.

The restricted environment under which this tour has unfolded, and which has prevented both sets of players from visiting public spaces for much of the series, has meant that instead alcohol was more readily available at the teams’ hotels.

However, with no more immediate fixtures to protect, members of England and Australia’s squads were seen out partying around Hobart throughout the day on Monday and deep into the night.

Another party involving England players at the team hotel continued into the early hours of yesterday, the day after the leaked footage was filmed.