The farce of three-week old COVID-19 rules, designed for club cricketers, preventing one of the world’s best cricketers appearing in the struggling competition was highlighted when opposing captain Aston Turner from the Perth Scorchers said he’d like to see Smith play.

“I like playing against the best players in the world and Steve’s one of those guys,” Turner said. “We feel like if we want to win this competition we have to beat the best players and if he’s a part of that Sydney Sixers team, well that’s a challenge we look forward to.”

Asked if bringing Smith in for the final would damage the integrity of the competition, Turner replied: “As a fan I would have liked to see Steve Smith playing. I probably can’t change my tune now because we’re matching up against them.”

Injuries and COVID-19 may rob the Sixers of their top five regular batsmen against favourites the Scorchers at Melbourne’s Marvel Stadium.

The Sixers only made it that far thanks to stand-in opener Hayden Kerr blazing an amazing 98 not out to claim a last-ball victory against the Adelaide Strikers at the SCG on Wednesday night.

In the process the Sixers lost batsman Jordan Silk with a hamstring injury while captain Moises Henriques and veteran spinner Steve O’Keefe are still in doubt with calf strains despite Henriques believing they will play.

The Sixers have applied for Jack Edwards to finish his COVID isolation six hours early so he is available, while Dan Hughes remains in doubt with an ankle strain. Both were late withdrawals from last Saturday’s first final against the Scorchers. 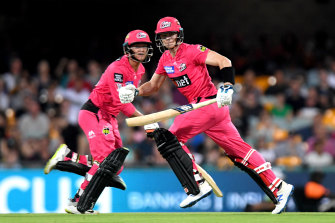 Steve Smith in action for the Sixers.Credit:Getty

The Sixers then lost leading run-scorer and wicketkeeper Josh Philippe, who withdrew before Wednesday’s final with COVID.

Henriques said the Sixers had enough players left in their squad to field an XI.

“We might have to pick bowlers in batting positions,” he said.

Silk was sent in to bat late in the game despite his hamstring injury and then retired hurt for the last ball so Lenton could run with Kerr as the Sixers needed two runs to win. He hit a four thanks to a misfield.

Mark Waugh questioned on Fox whether it was in the spirit of the game, however Strikers coach Jason Gillespie had no issue with the move.

“I’ve seen some discussion regarding @SixersBBL tactics late in the game retiring a batter (Silky),” Gillespie said on Twitter. “As opposition coach, I had no issue at all with it. They were playing within the laws of the game and it was a sound tactic. All the best to them for the final. Dizzy.”