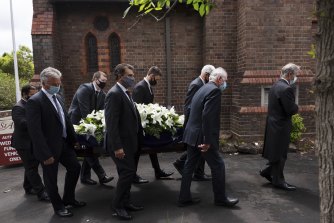 Davidson died late last month aged 92. A powerful and talented sportsman who also excelled at rugby and tennis, Davidson had an imposing cricket career for a decade from the early 1950s as a brilliant fieldsman, hard-hitting batsman and left-arm swing and seam bowler without peer. 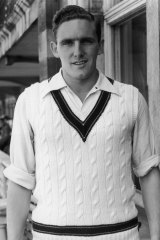 Alan Davidson during his playing days.Credit:Getty

He played 44 Tests, claiming 186 wickets at an average of just 20.53 before continuing his lifetime of service to the game as an administrator. It is the second-lowest average for any bowler with more than 150 Test wickets behind England’s Sydney Barnes (16.43).

In the 1960 tied Test against West Indies in Brisbane, which Davidson played with a broken finger, he became the first player to score 100 runs and take 10 wickets in the same match – a feat only matched three times since.

It was Davidson’s son Neil who revealed the personal touch to his father’s many achievements.

Neil recalled that as a young boy, his father would return after long cricket tours and bring exotic parts of the world to their lounge room in western Sydney.

Davidson would put up a small screen, turn off the lights, and show eight millimetre films of the places he had been. 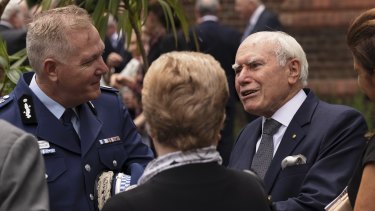 “In pre-television days we were transported to places that were beyond our comprehension,” Neil Davidson said.

“Dad and his teammates driving through the Kruger National Park in a small car with monkeys all over the place. Giraffes and elephants in the background.

“Or the Taj Mahal from his tour of India. Dad on the beach in the West Indies with his teammates. Young men who were the heroes of a nation at play with youthful exuberance having the time of their lives.

“He would tell us stories about meeting people like Boris Karloff, Sir Laurence Olivier, Peter O’Toole.”

A great storyteller with an eye for detail, Davidson loved passing on tips and his favourite prop was a bread roll at lunch, of which there were many during the 33 years as chairman of the NSW Cricket Association and 20 years as member of the SCG Trust.

Placed in the imposing grip of his large left hand with index and middle fingers on the top and thumb underneath, Davidson would point the roll at just the right angle for the perfect inswinger.

As former SCG Trust chairman and cricket historian Rodney Cavalier observed during the eulogy: “A bread roll was never safe with Davo”.